JuJu Smith-Schuster Will Always Wonder ‘What If?’ About Antonio Brown And Talks About Unimaginable Scrutiny 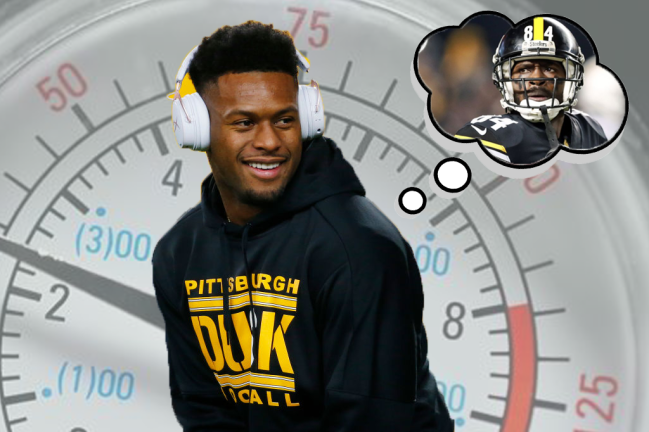 Steelers wide receiver JuJu Smith-Schuster has had a strong, but highly-scrutinized career thus far. The dynamic fifth-year player is not afraid to put himself out there and has created a significant presence online. Professional athletes, particularly in the NFL, are not typically as active on social media platforms as Smith-Schuster. That visibility leads him to be the topic of a lot of discussion— from media outlets, opponents and teammates alike.

On and off of the field, Smith-Schuster is a personality and if football wasn’t in the picture, he would be just fine. The 24-year-old from Long Beach, Calif. says that if he wasn’t suiting up on Sundays, he would be a full-time video game streamer, a YouTuber or playing rugby overseas. While the third career choice is an outlier, the first two make a lot of sense because he is already doing them.

Smith-Schuster has his own YouTube channel, frequently posts on Instagram and TikTok, and streams on Twitch. In fact, he recently partnered with Charmin on a pretty cool AI project. The ‘BRB Bot’ allows streamers and those on video calls to get up and use the bathroom without anyone knowing. While you’re gone, the pre-recorded bot makes it seem like you’re there. It’s actually really cool.

Psyched to team up with Charmin to roll out the super dope Charmin BRB Bot. Currently in beta… but you never know! ✌️🤫 #fyp #CharminPartner #BRBBot

His beta roll out isn’t the only reason that his TikTok is famous. More notably, he would often do the viral “Corvette Corvette” dance at midfield prior to games last year. Even as it agitated his opponents, he wasn’t going to stop and kept his word. Things escalated later in the season after the Steelers clinched the AFC North and then lost to the Browns. That allowed their rivals to make the playoffs and mock him after the game.

Smith-Schuster went one step further and said his now-infamous quote, “the Browns is the Browns.” After beating Pittsburgh in the Wild Card game, the Browns were quick to mock his TikTok dancing and Baker Mayfield trolled his quote.

Needless to say, Smith-Schuster has ruffled some feathers with his antics. While he has been placed under a negative spotlight along the way, the former USC Trojan has learned a lot from the coverage.

“The media is always going to portray something how it wants to build up stories,” he said. “I’ve learned that they create these stories to hit a headline or be the first one to get something out. Anything I say or anything I do isn’t always going to be put in a positive or good way.”

No matter how the story is framed, Smith-Schuster isn’t mad about it. He has learned to understand the business, knowing that there are always two sides to a story, whether they are both reported or not.

Over his first four years in the league, Smith-Schuster’s growth has come with the ability to shake things off. When he’s doing the TikTok dances, streaming on Twitch, or making a YouTube video, he has learned that with the good, the bad will always be attached.

With that being said, he doesn’t plan to stop. The dancing will continue if he wants it to and he won’t stop being unapologetically himself.

What could have been with Antonio Brown.

Smith-Schuster’s persona is polarizing and he’s quickly risen to superstardom. He believes that notion changed the entire landscape of the NFL, speaking specifically to his relationship with Antonio Brown. When Pittsburgh drafted Smith-Schuster in the second round of the 2017 NFL Draft, the organization had high expectations. Ben Rothlisberger was slinging the pill, Le’Veon Bell was pounding the rock and Brown was a 1,000-yard receiver at the peak of his career.

In their first two seasons, the rookie-veteran wide receiver duo showed flashes of excellence. Despite missing out on the playoffs in 2018, the perennial AFC North title contender had one of the top explosive offenses in football. Smith-Schuster and Brown were big reasons why. The former caught a team-high 111 passes for 1,426 yards and seven scores, while Brown recorded 104 catches for 1,279 yards and 15 touchdowns.

Following the season, Brown was dissatisfied with his role on the team — alongside Smith-Schuster — and was eventually granted his request for a trade. To this day, Smith-Schuster believes that the two could have accomplished something special if the two co-existed. However, he feels as though ego got in the way and Brown couldn’t handle sharing the spotlight.

“We both had 1,000 yards and 100 catches that year,” Smith-Schuster said. “Everybody was eating. But it was also the first year that (Brown) had someone next to him who had more catches than him and he couldn’t handle that.”

The two don’t stay in touch or speak to one another anymore, but Smith-Schuster always has “what if?” in the back of his mind.

Playing on a one-year, $8 million contract this season, Smith-Schuster has high expectations for himself anf the Steelers. Even though the roster loses some talent, including running back James Conner, most of the team returns and he is excited about the team’s draft class.

“We drafted guys to come in and play early,” he said. “We drafted Najee Harris to play running back and got a lineman to help with our depth, and the rest of the class fit our needs. At the end of the day, we’re going to have a lot of guys coming in to play right away. Yes, you want that mindset to win a Super Bowl, but for me, we have to get through our division and make the playoffs first.”

As for his own career, Smith-Schuster has a lot to prove. Free agency is looming, again, and he is ready to make his mark. In addition, he has said before that he will be lining up on the outside more this season. That is where he saw his most productive seasons and he is returning to his spot beyond the numbers.

Pittsburgh’s 2021 regular season begins on September 12th against the Buffalo Bills. It will be a tough test right away, but Smith-Schuster says they’ll be ready.