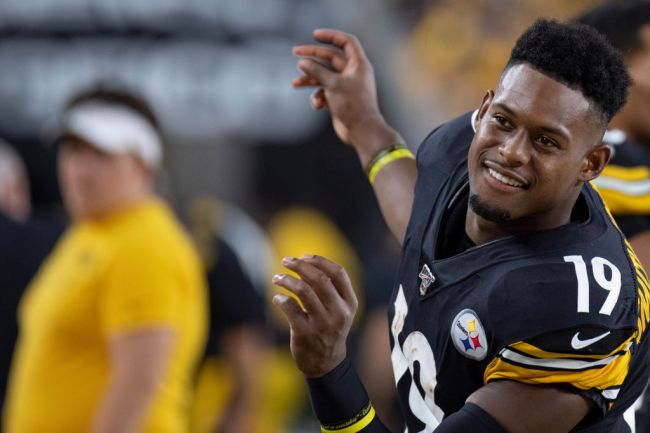 Steelers wide receiver JuJu Smith-Schuster didn’t participate at practice on Thursday while dealing with a knee issue, but he still took the time to take some shots at the Browns ahead of their AFC Wild Card matchup on Sunday night.

The Browns may have knocked off the Steelers 24-22 last week, but Pittsburgh elected to sit Ben Roethlisberger and other key starters for that game. Pittsburgh annihilated Cleveland 38-7 earlier in the regular season and Smith-Schuster wanted to make a point that the Browns are still just the Browns in his mind.

“I think they’re nameless, gray faces,” Smith-Schuster explained. They have a couple good players on their team, but at the end of the day, I don’t know. The Browns is the Browns.”

You’d think Smith-Schuster’s USC education would have clicked in and he would have used the proper wording in saying that the ‘Browns are the Browns’ instead of ‘the Browns is the Browns,’ but we’ll let that slide. At the end of the day, it’s just some bulletin board material for Cleveland.

In the two matchups against the Browns during the regular season, Smith-Schuster had eight catches for 71 yards and one touchdown.

It’s been an incredibly difficult week for the Browns leading up to what will be their first playoff game in 18 years. Earlier in the week, Cleveland announced that head coach Kevin Stefanski, two other coaches, and two players had tested positive for COVID-19 and Stefanski will have to miss the game against the Steelers. Given the positive tests and contract tracing taking place, the Browns’ facility has remained closed all week.

Two Browns players were also cited for drag racing earlier in the week adding even more distractions to the situation.

The Browns of course saw the video of Smith-Schuster talking trash and took to Twitter to respond.