2 Browns Players Reportedly Cited For Drag Racing, One Says He Was Just Trying To Get Away From COVID 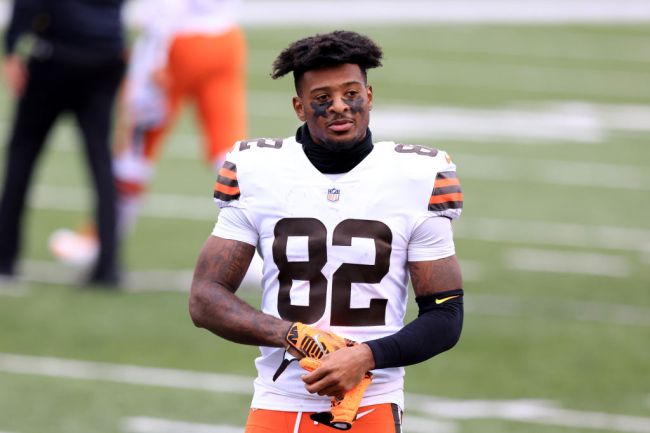 The hits just keep coming for the Cleveland Browns ahead of their playoff game against the Steelers on Sunday – their first playoff game in 18 years.

On Tuesday, the Browns announced that head coach Kevin Stefanski, two other coaches, and two players had tested positive for COVID-19 and Stefanski will have to miss the game against the Steelers. Given the positive tests and contract tracing taking place, the Browns’ facility was closed.

Later in the day, two other Browns players found themselves in a bit of trouble with the law. According to ESPN, offensive lineman Jedrick Wills and wide receiver Rashard Higgins were both cited for drag racing.

According to the service report released by Westlake police, the two were pulled over just before 9:30 a.m. ET and were each written $124 tickets. Police also conducted a probable cause search in one of the vehicles for a suspected marijuana joint, according to the report. Police didn’t specify which vehicle had the suspected joint, and neither Higgins nor Willis was cited for it.

Higgins, who sits second among Browns in receiving yards this season, took to Twitter to explain himself. He jokingly tweeted, then later deleted, that his foot slipped and that he was just trying to get away from COVID.

“I’d like to apologize for drag racing in Westlake as there's a drive into deep left field by Castellanos that will be a home run. And so that will make it a 4-0 ballgame.” pic.twitter.com/AVbozPWc1I

Wills, a rookie out of Alabama, has started all but one game for Cleveland this season while Higgins has come on as a favorite for Baker Mayfield. Losing these two guys from a suspension would have been a major blow to the Browns, but based on the report, it’s highly unlikely any sort of discipline to that degree takes place.

The Browns issued a statement saying that they “are aware of the incident, will gather more information and handle this matter appropriately.”