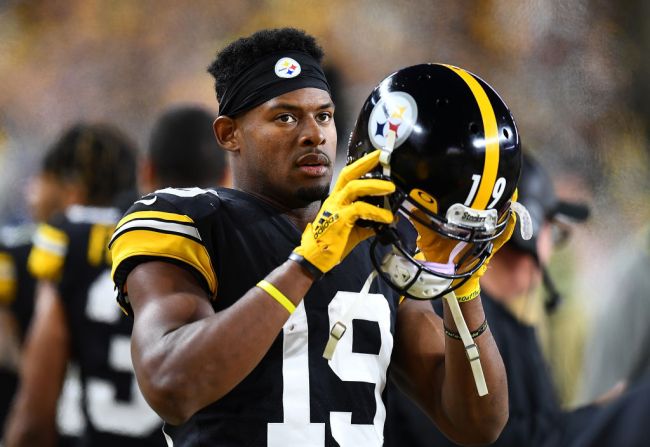 There have been so many stories worth paying attention to this NFL offseason, most involving big-time quarterbacks around the league, the fact that JuJu Smith-Schuster is an unrestricted free-agent has flown under the radar. While the Steelers wideout has said that he wants to remain in Pittsburgh, that may not be something that happens.

I’m not the one assuming that Smith-Schuster will be playing for a new team next season, Bob Labriola published a story about it on the team’s official website. It’s extremely uncommon to see a team publish an opinionated piece about one of its players, whether they’re a free agent or not, but maybe this is a new thing in 2021?

“Smith-Schuster is set to become an unrestricted free agent on March 17, and despite his pronouncements on social media that he wants to continue his career with the Steelers, he’s unlikely to want to accept what the cap-strapped Steelers would be able to pay him on a new contract,” Labriola wrote.

Labriola seems to be convinced that the Steelers simply won’t be able to offer Smith-Schuster the type of contract he’s after as the 24-year-old will be looking for a significant pay bump compared to the four-year, $4.1 million deal he signed after being drafted out of USC in 2017.

Smith-Schuster was second on the team last season when it comes to targets behind Diontae Johnson and finished third in total receiving yards with 831 yards. Pittsburgh doesn’t appear to see him as a No. 1 receiver therefore shouldn’t be willing to pay him like one.

The Steelers were able to re-structure Ben Roethlisberger’s contract to open up a bit of cap-space, but unless Smith-Schuster just really wants to stay in Pittsburgh and not see a dramatic pay increase, the writing seems to be on the wall that he’s on his way out.