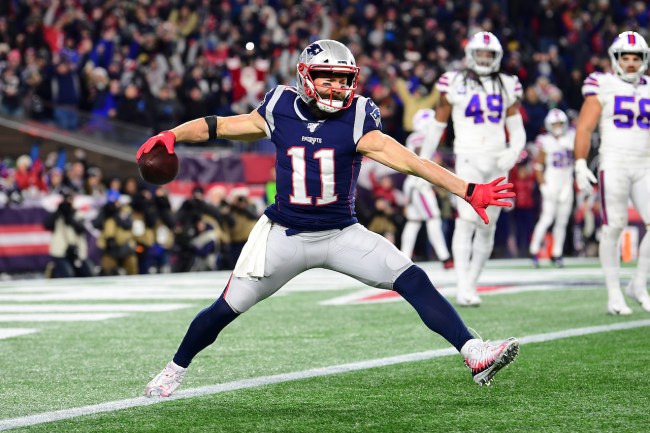 The New England Patriots are cheaters — there is no other way of slicing it. They analyze the rules and see if there are ways to bend them in their favor. It’s simultaneously disgraceful and respectable.

And frankly, if I was a Patriots fan, I would love it, because not only do they cheat, but they do so effectively, as it is upon this rule-breaking that the Patriots have built a six-ring dynasty. A means to an end, as it were.

That said, though, if I were a Patriots fan, I’d also ask that the players — such as Julian Edelman — kept their mouths shut when it comes to said cheating ways, as it only brings further attention to the sketchiness of the New England organization.

The Patriots players, though, — who are so invested in their rule-breaking ways — have become so numb to the idea of cheating that they’re now blatantly pointing it out in their postgame press conferences without thinking twice.

Take Edelman, for example, who openly admitted to faking a head injury against the Bills in order to avoid being penalized.

Edelman had to leave the game to undergo the league’s concussion protocol, only returning in the fourth quarter. It was also an injury that, after the game, Edelman admitted he was “trying to sell.”

The incident occurred on a play when Edelman committed pretty blatant offensive pass interference, setting a pick on a defender that freed up Benjamin Watson for a Patriots touchdown. Edelman knew he would most likely be flagged for the pick, so he briefly tried to sell it as if the collision was inadvertent, and had knocked him out.

After the game, Edelman came clean. “I was trying to sell it,” a smiling Edelman said of his playacting on the turf. “Hopefully, they didn’t see it.” [via USA Today]

So, in other words, he cheated: he bent the rules to positively impact him and his team, which is otherwise known as The Patriot Way. Way to go, Jules! And honestly, it’s not so much that he did it — many players do — it’s just the utter arrogance it takes to admit it that drives me nuts.

The ref threw a Revive at Julian Edelman 😂😂#BUFvsNE pic.twitter.com/qnPPaGXBT6