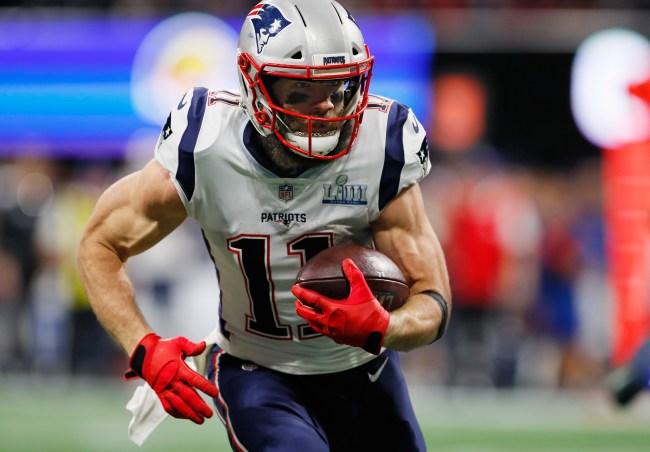 Julian Edelman’s story to becoming a three-time champ and the MVP of Super Bowl 53 as a wide receiver is a pretty remarkable one. As most of us know, the pint-sized Edelman — who’s a svelte, 5’10”, 198 pounds — was a college quarterback at Kent State University before he was moved to wideout by the Pats after they selected him No. 232 overall in the 2009 NFL Draft. Ironically enough, as a signal-caller in college, Julian Edelman actually went head-to-head against Los Angeles Rams head coach Sean McVay, with the player and coach meeting again in last season’s Super Bowl. Kind of weird, right?

Given the fact that Julian Edelman had to work his damn ass off to, not only convert to a wide receiver, but also maintain a spot on the Patriots’ roster, it’s easy to understand why people would brag about his work ethic and overall strength. After all, when your back’s up against the wall, you either fold and think you’ve got bad luck, or you dig deep and motivate yourself to prove people wrong. It seems like Edelman has done the latter his entire career, because listen to how a former Pats staffer bragged about the guy.

Speaking with The Athletic for a piece on slot receivers in the NFL, per NESN, the anonymous person didn’t hold back in dishing out praise for Julian Edelman, describing just how hard he’ll go to work, along with how strong he is. Just take a look at what the source said.

“Julian is strong as (expletive),” the former Patriots employee told The Athletic. “Some of these guys are (5-foot-10), 190 (pounds) and are thin-boned. You can push them around. They’re good 7-on-7 guys. He can block, can break a tackle and pound-for-pound is very strong. The guy’s toughness and competitiveness is in the 1 percent of people in the NFL. He is rare. He’s an absolute pit bull. (Wes) Welker and (Danny) Amendola weren’t as physical. He’s a lot stronger. He’s so (expletive) tough. If you ask him to go inside and crack on C.J. Mosley. He’s thinking, I’ll go in there and knock the shit out of him. (Braxton) Berrios will try it and be a bug on a windshield.”

Playing the slot receiver in the NFL takes a helluva lot of balls. Not only are you required to be slick with your routes and be daring going across the middle, but you’ve got to be ferocious against bigger defenders while run or pass blocking. Clearly, Julian Edelman has proven that during the course of his career, and this former New England Patriots staffer sure sounds as if there’s nobody out there who does it any better in the league right now.