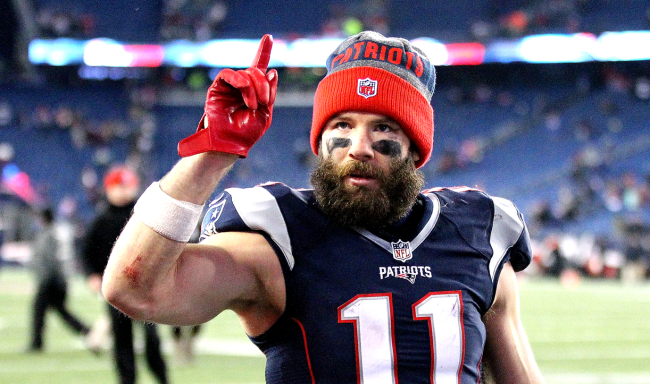 So he knows a thing or two about playing the position.

That doesn’t mean he knows everything though.

Case in point, this week while appearing on the I Am Athlete podcast, Julian Edelman shared who he believes are the top three wide receivers in the game today.

Julian Edelman was asked to give his top three current wide receivers in the NFL; he named four

“Top three? Top three…” Edelman said thoughtfully. “I like [Davante] Adams. I like him because he’s quicker than what you think … you can play him everywhere … he’s never not open.

“And you gotta go, like, my tweener, Cooper Kupp, he does a lot of everything. He’s not going to go up and Moss a dude, but he’s going to run comebacks, he’s gonna run go’s and get the back shoulder … he’s going to hit all these inside routes. He’s versatile and I’m a little biased towards those guys because that’s how I was. I played in all spots.

“And then you gotta go Tyreek [Hill], that speed,” Edelman concluded. “He’s so fast he doesn’t even have to run great routes and he’s going to get wide open because people are going to be terrified of his speed. So once he gets guys going, all he has to do is throw on the speed a little, and it’s over … when you have that kind of speed it’s unfair.”

Edelman also added another WR at the end to his list, @cheetah pic.twitter.com/EAAFVz3yOU

It’s certainly a heck of a list Edelman threw out there. Hard to argue with any of his choices.

What’s that? NFL fans do want to argue with his choices? What a surprise.

So the crisp route runners? Makes sense but idk why you’d have Keenan in over Hop

No wonder bucs don’t want him. Dude put Allen instead of @MikeEvans13_ 😂😴

doesn't have chase on his list so hes a casual.

Wow Julian 🤡not as smart as I thought he was

Some just took issue with the order Edelman ranked them.

Idc what this comment section says ima trust the dude who played in the league.