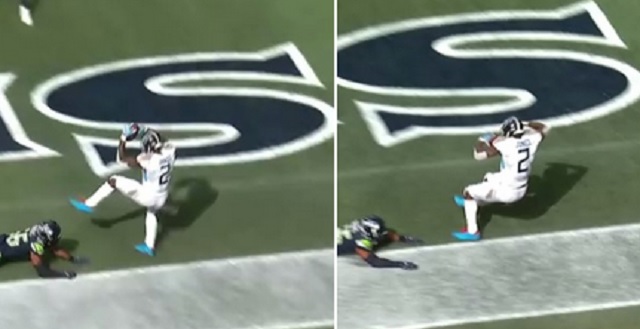 Julio Jones appeared to get screwed by the NFL rulebook and their bizarre rules.

Before the half, Jones appeared to make an amazing TD catch in the back of the endzone.

The refs took a look at the replay and determined it wasn’t a catch because Jones’ heel landed out of bounds even though both his toes were inbounds during the catch.

Here’s Gene Steratore’s explanation of why Jones was out of bounds on this play and why it’s not the same as “toe-tap” TDs.

Since Julio Jones' heel is coming down and fully lands on the ground, his entire foot must be in-bounds for the catch to count. If a WR "toe-taps" (ie – the Santonio Holmes catch in the Super Bowl), it counts as in-bounds. Replay concluded that Jones' heel landed out of bounds. pic.twitter.com/eePq3qQfWc

Titans fans were not happy with the ruling and argued that Jones’ heel was indeed inbounds.

This is way overthinking the rule. This is a touchdown. https://t.co/g517ZU8dZC pic.twitter.com/yXTawSGxGS

1) In literally every other situation, the toe is sufficient

2) The heel was in bounds https://t.co/boPjr7fFGd

this makes not a lick of sense. https://t.co/uNPR1Zz5ku