With All Due Respect To Julius Erving, You’re A Moron For Saying LeBron James Isn’t Even A Top-10 Player All-Time 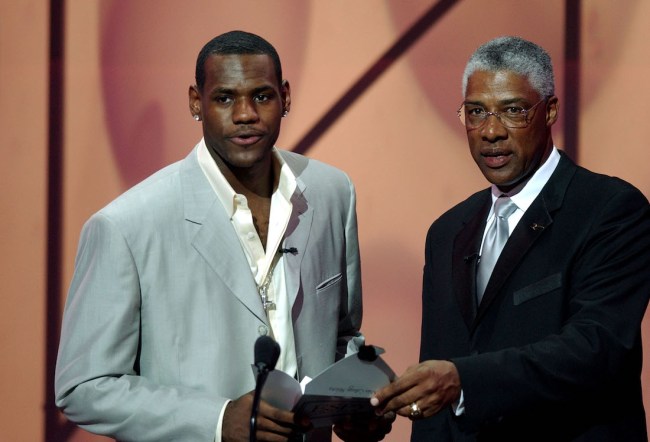 Julius Erving is one of the greatest NBA players of all-time, so he gets the benefit of the doubt (most times) when he’s speaking about the history of the league. Unfortunately, the Hall of Famer’s most recent comments about his all-time team didn’t exactly showcase his ability to identify the best players ever, with one guy — LeBron James — a glaring omission on Dr. J’s list.

Recently talking to Chris Haynes on the Posted Up podcast, Erving was asked to put together his list of the greatest NBA players of all-time, with the specific task of making all-time first and second teams. This is where things get strange, because Erving didn’t just list James outside of his top-5, but the Sixers legend didn’t even include the four-time NBA champ in his top-10, either. Here are the all-timers Dr. J listed on his first and second teams.

Uh, did Erving forget how dominant LeBron has been for the past 18 years? Has he forgotten about the 3-1 deficit he overcame in the NBA Finals against the greatest regular season team ever? Did he forget that he’s still an annual MVP candidate into his late-30s? Probably. But, regardless, take a look below to hear Dr. J’s reasoning for excluding James.

Now, look, I get it, LeBron James can rub people the wrong way for lots of different reasons. Whether it’s because he stands up for what he believes in and then gets mocked online for it, or, on the court, for putting together superteams with some of the best players in the game at the moment. But that doesn’t diminish anything he’s accomplished in his illustrious career.

While James may be to blame for creating the whole superteam thing, he’s not the first, last, or only great player to team up with superstars to win titles. Sure, LeBron gets blasted for scheming to form a Big 3 in Miami alongside Dwyane Wade and Chris Bosh in 2010, but guys like Magic Johnson and Larry Bird had Hall of Famers beside them during the ’80s, too, it just wasn’t by design via free agency. Well, by the player. You better believe the front offices in Boston and Los Angeles were doing their damnedest to add as many All-Stars as possible when they could.

As much as Erving would like you to think that the greatest NBA players of all-time won championships on their own, well, that’s just not the case. If it were, then guys like Charles Barkley and Patrick Ewing would have rings. And, more recently, players like James Harden and Giannis Antetokounmpo. Superstars need other superstars to win. Period. So go ahead and hate on LeBron James for candidly teaming up with guys publicly, but it’s been the way all-time greats have gotten theirs for years.