If The NBA Bubble Leads To More Superteams, Here Are The 5 Moves That Would Make The League Exciting 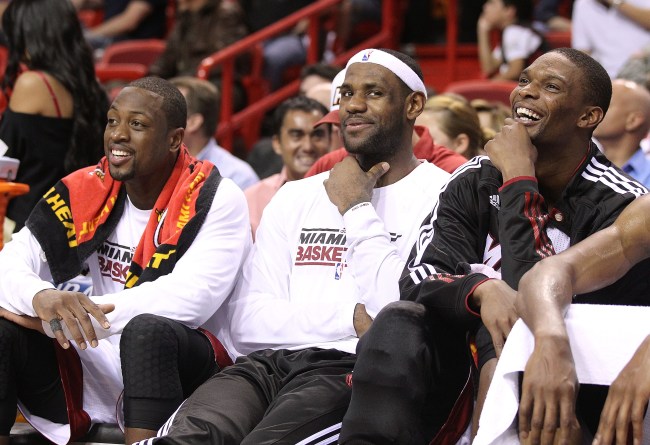 The NBA bubble has officially begun, with the 22 remaining teams believed to have a chance to win a championship this year all huddling in Orlando to restart the season. While we’ve seen players complain about their hotel accommodations, wonder WTF is happening with the food options, and give a behind the scenes look at things like the players’ lounge, there’s one aspect that some fans might be forgetting about — the amount of time all these players will have hanging out with one another.

Let’s face it, superstars like LeBron James are absolutely going to work their magic and try to recruit fellow players to join forces in the coming years. It’s reportedly what happened at the 2008 Summer Olympics when James, Dwyane Wade and Chris Bosh all discussed the possibility of playing with one another at some point — which came to fruition in 2010 when they formed a Big 3 on the Miami Heat — and this NBA bubble is that scenario times 200.

With one anonymous coach recently saying that the league’s bubble will inevitably lead to new superteams being formed because of all the tampering and recruiting that’s bound to occur with all these players together, it’s hard not to salivate over the possibilities. Here’s what the coach told Yahoo! Sports.

“The next super team will come out of this,” he told Yahoo Sports. “I believe it’s inevitable.”

“I walk into my hotel, I see [All-Star player] in the lobby,” he said. “We’re on the elevator, I get off on one floor, he’s on another. If I knew him like that and wanted to meet up with him, I could. We could golf, we could fish. There’s so much to do in the downtime, the league can’t police that stuff.”

With that type of immediate access for players to talk “off the record,” it got me thinking about what superteam options would be the most exciting for the league in the next year or so. So, without further adieu, take a look at some potential possibilities.

Both Jayson Tatum and Devin Booker are two of the NBA’s best young stars, so imagine the two joining forces in the biggest media market in the league — all while giving New York Knicks fans reason for optimism once and for all.

Sure, the Knicks suck, are pathetically run by owner James Dolan, and have missed out on the biggest free agents names over the past decade or so, but could Tatum and Booker change their luck to rejuvenate the franchise? In Booker’s case, it seems like he’s reportedly already lobbying for the Knicks — especially with his former agent Leon Rose now heading up the basketball operations for the team.

The NBA doesn’t really need the Knicks to be good in order to be relevant, but it sure as hell wouldn’t hurt. So maybe we see Booker demand a trade from the Phoenix Suns and Tatum sign in the Big Apple as a 2021 restricted free agent. Seriously, how fucking incredible would it be to see these two side by side in the backcourt?

It took some time for Victor Oladipo to prove he was worthy of being the No. 2 overall pick in the 2013 draft, but, now that he’s fully arrived, the 28-year-old would be a huge complement to another superstar. Could South Beach be the destination where the talented guard ends up landing? There have been some rumors in the past about it — and it’d be insane to see happen.

The Heat already have a bunch of young players on the cusp of breaking out, which pair nicely with a bonafide star in Jimmy Butler. Guys like Bam Adebayo, Kendrick Nunn and Tyler Herro are all averaging double-figures for Miami this season, and have put the team ahead of schedule when it comes to competing for a title this season. Adding Victor Oladipo next year would only accelerate things.

Assuming the Heat let Goran Dragic walk this offseason, Butler and his teammates should 100 percent focus their attention on recruiting Oladipo next season as his replacement — and the NBA bubble is the ideal place to pitch the idea.

Rudy Gobert To Either L.A. Lakers Or L.A. Clippers

Sure, Rudy Gobert was a fucking moron with his carelessness leading up to his positive coronavirus test back in March — which promptly shutdown the league — but there’s no denying the big man’s talents.

A two-time NBA Defensive Player of the Year winner, Gobert would bring instant credibility and athleticism to either the Lakers or Clippers, and provide protection in the paint for both hopeful title contenders. I mean, imagine Gobert with Anthony Davis on the Lakers down low, or with defensive studs Kawhi Leonard, Paul George and Patrick Beverley on the Clippers; it’d be insane.

Gobert’s set to become a free agent next season, and, given some of the tension between he and some of his current Utah Jazz teammates, maybe LeBron or Kawhi could convince him he’d be better appreciated in LaLa Land.

One of the underlying storylines heading into the NBA bubble is the relationship between Donovan Mitchell and Rudy Gobert, which stems from the big man allegedly infecting his All-Star teammate with COVID-19 months ago — which prompted the league to shutdown, and, reportedly, cause quite the rift between the two Jazz teammates. So could Mitchell be looking to maneuver his way out of Salt Lake City in 2021?

If the 23-year-old All-Star does have something sneaky up his sleeve, the Dallas Mavericks wouldn’t be a bad option.

Set to become a restricted free agent next offseason, Mitchell would pair up nicely with budding superstar Luka Doncic and his 24-year-old teammate Kristaps Porzingis. The trio together would be exciting AF, with Doncic manning the playmaking, Mitchell taking over the scoring load, and Porzingis stretching the floor and getting his where he can. If there were ever a Big 3 that could absolutely replicate the success of the Miami Heat’s Big 3 from 2010-14, this would be it.

It’s the elephant in the room that everyone seems to be talking about: Reigning league MVP Giannis Antetokounmpo joining the Golden State Warriors. As wild as it might seem, it’s a possibility that could be very real — so sorry to all you Dubs haters out there.

The rumors started last year, and, with Giannis up for an extension this offseason from the Milwaukee Bucks, all eyes are on what he decides to do — re-up with them, or decline the offer and keep his options open for next season, where he’d become a free agent. If that happens, Golden State will undoubtedly pounce.

Already stacked with a two-time MVP in Steph Curry, a lethal shooter in Klay Thompson, a former Defensive Player of the Year in Draymond Green, and, at the moment, a former No. 1 overall pick in Andrew Wiggins and the possible top pick in this year’s NBA Draft, Golden State has load of talented assets that’d make them an enticing choice for Antetokounmpo. And, should this actually happen, look out, because the Dubs would be even more lethal than they were the past five seasons when they won three titles and reached the NBA Finals in each of those years.

The Warriors aren’t one of the 22 teams playing inside the NBA bubble, but that doesn’t mean they aren’t closely “monitoring the situation” with the Greek Freak, AKA, are absolutely tampering to recruit him in a bevy of different ways.