Oh, Great, The Warriors Are Reportedly Interested In Reloading By Trading Away The Potential Top Pick For More Stars 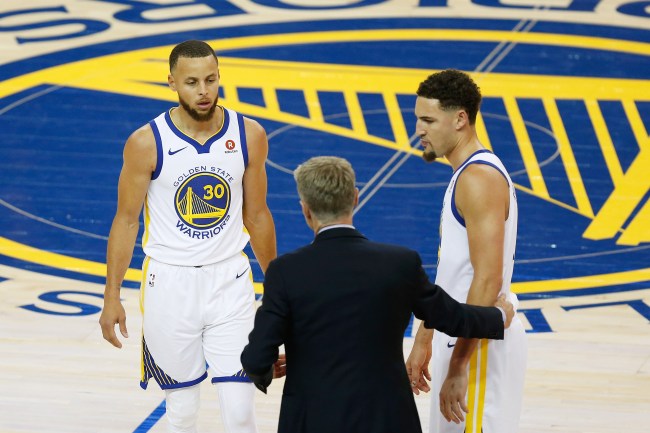 Remember the Golden State Warriors? You know, the team that went to five-straight NBA Finals’ from 2014-19, winning three titles in the process? Yeah, well that team still has plenty of ammunition on its roster headed into this upcoming offseason, and, rumor has it, they’re looking to reload; not rebuild.

While the Warriors had a shitty AF season in 2019-20 after losing Kevin Durant to free-agency, seeing Klay Thompson rehab his torn ACL, watching Steph Curry get hurt with a hand injury, and suffering through Draymond Green struggle alongside young, unproven talent, it seems like they’ll be back in the mix for a championship next season if their rumored plan comes together.

As one of the eight teams that won’t be participating in the NBA’s return in July to finish the 2019-20 season, the Golden State Warriors are now primed to get healthy and pretty much have their pick of the litter when it comes to assembling a title-chasing roster. They’ve got a young asset in Andrew Wiggins to dangle in front of teams, along with the potential top pick in this year’s NBA Draft, meaning the Dubs could be dominating for the next five years again after just one season of pure crappiness.

Speaking about the Warriors’ plans this offseason on a Complex podcast, The Athletic’s Shams Charania hinted that Golden State could be aggressive in pursuing both veteran free agents and potential trade scenarios, mentioning the team could “look hard” at packaging a top-3 pick in the draft for the right player.

“They’re going to look hard at maybe packaging the pick,” NBA insider Shams Charania said on a podcast from Complex. “You’re looking at a veteran team, and there’s already some veteran free agents that are looking at the Warriors. They’re looking at them gearing up and loading back up.”

“You have Steph Curry, Klay Thompson, Draymond Green back healthy,” Charania said. “Now you’ve got [Andrew] Wiggins. They need a center, they need another maybe wing or guard coming off the bench. But other than that, this team is going to be geared up and loaded to go.”

Although previous rumors mentioned that the Golden State Warriors could be eyeing Georgia shooting guard Anthony Edwards as the top pick — should they win the NBA Draft Lottery — we all know that that could just be a smokescreen. Edwards is, essentially, the same player as the aforementioned Wiggins, and with Steph, Klay and Draymond all coming back next season, why not go chasing more titles now by trading a potential top-3 pick for a veteran? Could that veteran be a guy like reigning league MVP Giannis Antetokounmpo; who has already been linked to the Warriors?

Golden State shares the best odds of winning the draft lottery with both the Cleveland Cavs and Minnesota Timberwolves, and, regardless of securing the No. 1 spot or not, it seems as if they’ll be looking to trade for a veteran to pair with their other All-Stars and try to pick up right where they left off from the past five seasons. That’s obviously a scary scenario for the rest of the NBA.