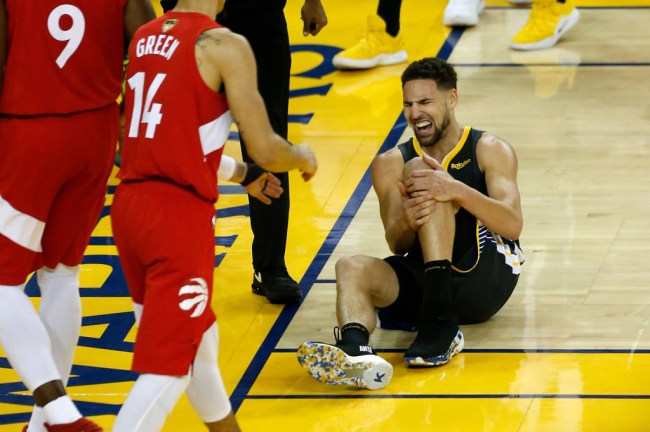 The Warriors entered last season’s NBA Finals as heavy favorites to beat the Raptors but suffered two major setbacks over the course of the series after losing Kevin Durant to an Achilles injury a game before Klay Thompson saw his season come to an end after he tore his ACL.

Golden State would lose Durant for good after he opted to sign with the Nets following a season’s worth of speculation, and while he’s expected to miss all of next year, it appeared Thompson was initially optimistic he could return after the All-Star break (a sentiment that was echoed by his dad back in August).

There’s no doubt the Warriors are going to face an uphill battle if they want to bring home another championship, as this is the first time in a few years they aren’t the favorites to secure a title.

However, it looks increasingly likely they’re going to have to go their entire campaign without the aid of Thompson.

On Tuesday, NBC Sports reported Steve Kerr doesn’t believe the five-time All-Star will see the court at all next season despite the earlier—and cheerier—reports to the contrary:

“It’s unlikely that he’s going to play this year. So we have to understand that.

You have to look at it realistically. I had an ACL [tear] in college, and I missed a whole season. Generally, an ACL for a basketball player is a full-year recovery, and if it’s a full year for Klay, that puts them out for the season.

However, he did say there’s a slim chance Thompson could stage a late-season comeback assuming the rehabilitation process exceeds expectations:

We’ve kind of left the door open in case the rehab goes perfectly and the doctors say he can go. But the reality is, on April 1, that’s the nine-month mark. … April versus nine months post-op for an ACL.”

As much as the Warriors could use Thompson’s services, I’d imagine they’d err on the side of caution unless they believed he was fully healed, and even then, I’d be shocked if they let him suit up again unless they felt they were legitimate contenders for the Larry O’Brien trophy.

I guess only time will tell.