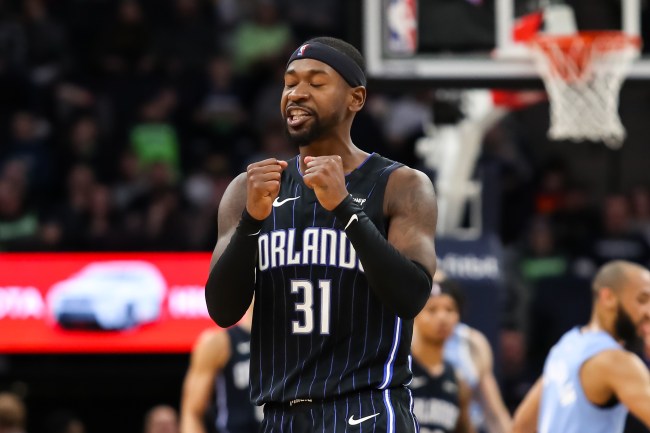 The NBA bubble has been getting shit on by just about every single player that’s entered it so far. We’ve seen guys complaining about their hotel rooms. Other dudes showing off the food options (or lack thereof). And, of course, there was J.R. Smith — who’s lucky to even be back in the league after over a year away — really laying into the league with a series of videos on Instagram Live the other day.

While the consensus might be that the NBA bubble is more like prison than the luxury living pro ballers usually get — ahem, looking at you, LeBron James — not all is bad once players have entered the locked down campus. And if you need proof of that, just take a look at the video that Orlando Magic guard Terrence Ross posted to his Twitter the other day, which showed off the Players’ Lounge is at the place.

Terrence Ross gives a first look at the players’ lounge 👀

Chock full of pleather chairs you’d typically see inside a dentist office waiting room, a bunch of arcade games, big screen TVs that (undoubtedly) are connected to video game systems, ping pong and pool tables and a waterfront view, I’m not quite sure if Terrence Ross is shitting all over the Players’ Lounge in the NBA bubble, or if he’s actually kind of impressed with the setup, but every teenage boy probably just poked a hole in his shorts in excitement.

What’s hilarious to me is that, while many NBA players are young AF, they’re still multimillionaires, meaning they’re used to five-star hotels, free shit everywhere they go, luxury cars and first-class service. But instead of making the Players’ Lounge inside the NBA bubble resemble the Four Seasons in a major city, it looks more like a fucking Chuck E. Cheese for adults.

Unsurprisingly, once Twitter folks saw Ross’ tweet, there were plenty of reactions about the digs in the Players’ Lounge, so take a look below at a few reactions.

lebron on his own private island in Orlando outside the bubble pic.twitter.com/SITUjADOXf

Lebron got his own in his apartment probably

As more and more teams arrive in the NBA bubble to prep for the league’s restart later this month — which includes some extreme measures in order to stay safe by a few guys — I’m sure we’ll see more looks behind-the-scenes at all the craziness going on. I mean, shit, you’ve got a bunch of grown men with nothing to really do inside a quarantined area that’s made for college kids; there’s sure to be some hilarity that ensues.