Every Summer Camp In America Has A J.R. Smith 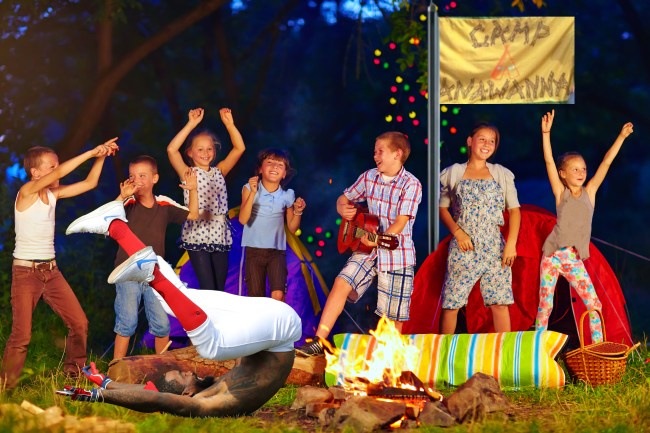 Anyone whose parents dropped them off with a group of unvetted strangers for an unhealthy period of time as a vulnerable child so they could have uninterrupted intercourse knows a J.R. Smith.

The anti-establishment alpha who confidently hits on the female camp counselors while the rest of us children are just discovering our penises. The camper who thinks sleeping at night is a sign of weakness, and waits until his bunk buddy dozes off before mummifying him with shaving cream. He also happens to be the only person at camp who packed shaving cream because he somehow has a full beard at, like, 12. The dude who sent little Timmy to the emergency room after proving himself untrustworthy on a trust fall. The low-key sensitive who always randomly bursts out in tears once during the week revealing past traumas that fully explain his current behavior but everyone is too intimidated to make fun of him for it.

Here is J.R. arriving at the camp, declaring “this shit is ass,” immediately establishing himself at odds with the establishment while also using curse words our parents would ground us for.

Lakers guard JR Smith goes live on Instagram after landing in Orlando. He declares: “This shit is ass” just minutes after arriving in the #NBABubble pic.twitter.com/luUVO5fRlF

Below is J.R.’s haul from the vending machine he tipped over and blamed the one shy kid on the floor who is too weak to defend himself. That little boy now does Crossfit now and drives an elevated Chevy with a “Don’t Tread On Me” flag.

😭😂 ay why JR Smith go off real quick on the NBA about the food at the bubble 😂 good to have you back my boy pic.twitter.com/Mp5InzWhi7

J.R. immediately publicizes the conspiracy theory the camp staff is out to get him by failing to provide him a blanket, a theory which he will totally buy into and use it as justification for turning the linoleum hallway into a slip-n-slide at 2:42 am.

J.R. pictured here holding his roommate’s dinner hostage until he surrender’s his blanket.

Jr Smith is a national treasure. Imagine watching him pull this out on his insta live. Dude wasn’t having it😭😭😂😂 pic.twitter.com/QukFVFfUbn

Below should be a familiar snapshot for campers—the entire hall giddily awaiting J.R.’s next stunt but don’t want to make themselves too visible out of fear they’ll get a wedgie.

And ultimately—only after a particularly brave staffer musters the courage to confront the child—Smith bends the knee and surrenders to authority. Until tomorrow when he runs the fat kid’s undies up a flagpole.

nba made jr smith shut it down lmfao pic.twitter.com/BpFJ37CESC