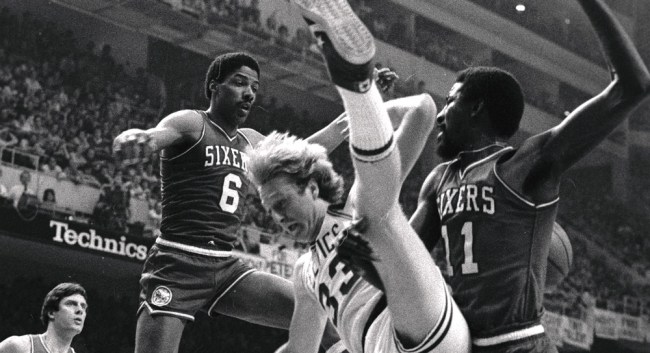 Back in 1984, the rivalry between the Boston Celtics and Philadelphia 76ers was at a fever-pitch as back in those days both teams, with Larry Bird and Julius Erving, were actually good at the same time and in contention to win the NBA championship.

Now, as we were reminded by Kevin McHale on Monday, Larry Bird was one of the most notorious trash-talkers in the game back in the day. He also wasn’t above using “shortcuts” and harassing the other team’s players into doing something stupid.

So, late in a November game between the two teams, Bird was called for an offensive foul after it looked like he threw an elbow at Doc. Erving, who scored just six points in the game to Bird’s 42, was obviously frustrated and retaliated the next time down the court, leading to one of the wildest melees in NBA history.

Now, 24 years later, Erving appeared on ESPN’s Get Up! and detailed exactly what went down, at least from his perspective (transcript via For The Win).

“There’s a photograph of Larry and I choking one another, and neither one of us sign it. It always shows up at the card shows and whatever, we’re not going to dignify it, dignify the moment, because the game isn’t really about fighting unless you’re in game and the clock is running. Then it’s always a fight, it’s always a battle.

…Early in November, the Celtics were ready to go. They came out ready and red-hot and roaring, and we were kind of ‘OK, we just won this thing,’ we played the longest season so we’re just getting started – and we’re breaking in a new player.

So the fight, actually, there was an offensive foul called on Larry. He didn’t like the call so he was really mad at the referee. And he came down court and he was kind of like stomping. He was in front of his bench, and it looked like a moment in which he was going to take a swing. It was very uncharacteristic because, you know, we did Converse commercials together, we did Spalding commercials together, so we were kind of cool. But I thought something was going to happen, because he was definitely mad – but he was mad at the referee, he wasn’t mad at me.

I just extended my arm to hold him back, and it ended up sliding up to his neck. Then it was on. So it was really inadvertent. I didn’t really mean to grab him by the neck. I pushed him in the chest, hand slid up, got to his neck, he reaches for my neck… Next thing I know, it’s a melee. That was it.”

Amazingly, neither player was suspended, but they did each receive a $7,500 fine, the second largest fines ever handed out at the time. M.L. Carr and Moses Malone were each fined $3,000, while rookie Charles Barkley was fined $1,000 and six other players got $500 fines for leaving the bench, reported the New York Times. Sixers coach Billy Cunningham was assessed a $2,500 fine bringing the grand total for the brawl to $30,500.

Listen to Julius Erving tell the story from his perspective below…