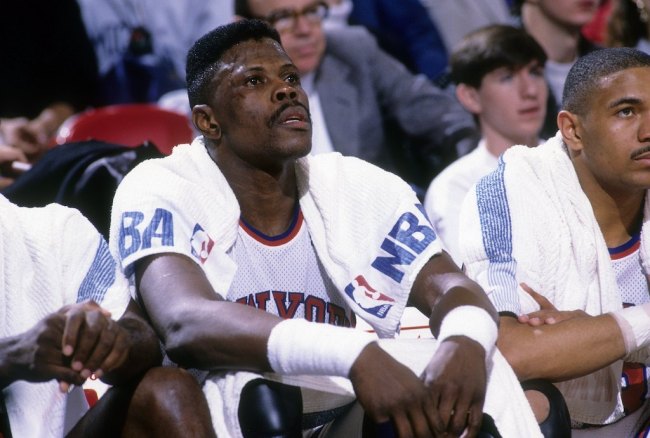 NBA superteams are common these days, with superstars joining forces to make their path towards a championship just a little bit easier, but, back in the day, they weren’t necessarily an actual thing. Sure, Michael Jordan had Hall of Famers like Scottie Pippen and Dennis Rodman during the Bulls’ second three-peat in the ’90s, but that wasn’t because the three of them got together to team up like we see nowadays. That almost seemed foreign to stars back then.

However, in today’s game, we get guys like Kevin Durant and Kyrie Irving plotting their partnership, along with LeBron James doing anything he can to campaign for as many All-Stars to surround him with. It’s kind of pathetic, but, hey, that’s the modern NBA.

Although Jordan literally cringes at the thought of NBA superteams, one of his biggest rivals during the ’90s, Patrick Ewing, recently admitted that he was pretty damn close to forming one. Talking to Ryan Hollins and Brendan Haywood on the Opinionated 7-Footers podcast, “The Towering Inferno” said that a contract dispute with the New York Knicks nearly led him to the Warriors to play alongside the famed “Run TMC” trio of Tim Hardaway, Mitch Richmond and Chris Mullin — two of whom are Hall of Famers.

“I had it in my contract that I had to be the fourth-highest paid player in the league. The Celtics robbed me. They did some stuff and I end up not being that. I was thinking about going to Golden State. Imagine me, Chris Mullin, Mitch Richmond, and Tim Hardaway. I thought about doing that but it didn’t work out so I stayed in New York.”

First off, damn, hoops fans sure were robbed from ever seeing, arguably, the most powerful NBA superteam in league history. Ewing at his peak with Mullin, Hardaway and Richmond would’ve been incredible to watch, with the Warriors blending a fast paced offensive attack with a defensive prowess in Ewing manning the paint.

Second, talk about a boss move by Patrick Ewing’s agent, huh? The fact that the Hall of Famer had a clause in his contract that said he had to be the fourth-highest paid player in the league is some A+ negotiating.

Third, how many titles would this Warriors team have won? Say the foursome played together for four years — which seems reasonable. It’s not out of the question to imagine at least three titles during that timeframe. I don’t care who Michael Jordan had playing alongside him, not too many rosters would’ve been able to handle the firepower of that potential Dubs team.

Sadly, it didn’t happen. But at least we know that it was something Ewing was thinking about — and that this whole concept of an NBA superteam isn’t just something that some entitled players these days implemented into the league.