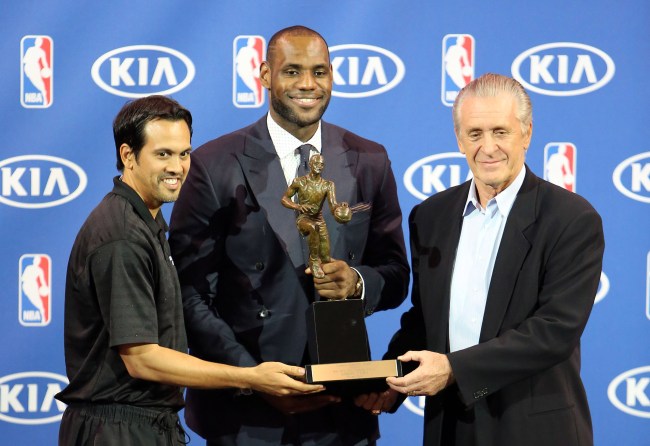 Pat Riley is one of the OGs in the NBA, having led multiple franchises to the promised land by winning championships as either a head coach or executive with the Los Angeles Lakers and Miami Heat. As much as Riles has done in his Hall of Fame career in the NBA, though, there’s one thing that he probably wishes he could have a chance to do all over again — and that’s have a team with LeBron James, Dwyane Wade and a healthy Chris Bosh.

We all know that the superstar trio joined forces in South Beach in the summer of 2010, promptly changing the NBA landscape and leading the Heat to four-straight NBA Finals appearances and winning two titles. But following a 2014 Finals loss to the San Antonio Spurs in five games, LeBron James decided he was taking his talents back to the Cleveland Cavs to try and win a title for his hometown team, leaving Pat Riley pissed.

While Riley has talked about some of his feelings following James’ 2014 departure, in a recent interview with ESPNs Dan Le Batard, the current President of the Miami Heat opened up even more, describing more of his feelings after LeBron called him that summer to tell him of his plans, while also admitting that he “saw a dynasty fly out the window.” Take a look at the video below.

It’s understandable that Pat Riley wasn’t just livid at LeBron James’ decision to leave the Heat in 2014 — after all, the dude was/is the best basketball player in the world — but the fact that he talked about some of the other feelings that overcame him following the news is interesting, with Riley showing a more human side than we normally get from sports execs. It’s also a reminder that sports is harsh AF, with Miami Heat fans probably relating to Riley’s assessment by wondering “what if” James had never left and the run with Wade and Bosh had continued.

The full Pat Riley interview can be seen on ESPN as part of a SportsCenter special with Dan Le Batard called “Art of Conversation,” but here’s a quick peek at some of the segments in it.

With a lifetime of basketball experience and lots of successes, it’s cool to see Pat Riley describe some of those things he’s lived through during his time in the NBA, so this is a definite must-watch.