Titans’ Jurrell Casey Declares Blake Bortles Is Going To Choke In The Playoffs, Gets Brutalized On Twitter 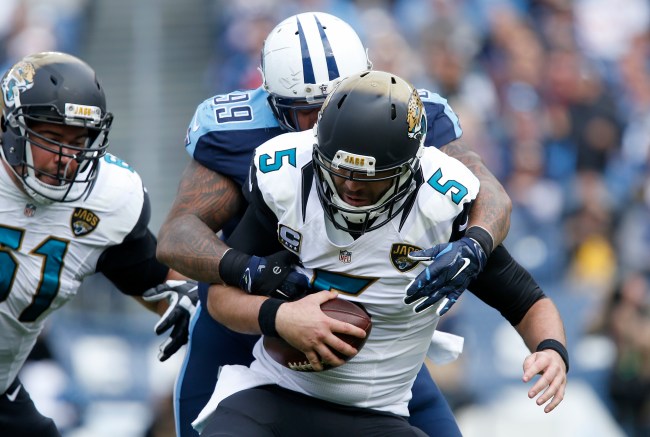 The city of Jacksonville has officially punched its first ticket to the playoffs in a decade. For perspective, the last time the Jags appeared in the post season, Kanye’s ‘Graduation’ was the album of the year, Peyton Manning still had human tissue in his neck, and I was caught up in a steamy fling with Anna DiFronzo down the hall of my freshman dorm. What happened to us, Anna? Oh, that’s right, other options.

In any event, the Jags transformed from a habitual cellar-dweller of the AFC South to AFC South Champions with a formidable pass rushing defense (recently dubbed “Sacksonville”) and Jalen Ramsey, one of the best young corners in the game.

If the Jags are going to advance deep in the playoffs, their defense and run game will likely need to do the heavy lifting. Blake Bortles, who has taken a beating from fellow players and the media for his inept quarterbacking at times, will need to play competently to stand a chance. The man blowhard Trent Dilfer once called the worst quarterback in the NFL

has played very poorly the last two games heading into the playoffs. Last week against the Titans, Bortles posted a 44.1 completion percentage, the second worst of the year. On Christmas Eve, Bortles threw three interceptions against the 49ers, the most he’s had in a single game since Week 3.

“As long as Bortles is back there, if the ball game is in his hands, he’s going to choke,” Casey said on 104.5 The Zone in Nashville.

It should be noted that Casey is likely still irate about his postgame scuffle with Jaguars linebackers Blair Brown and Donald Payne after Tennessee’s 15-10 victory Sunday, but the Titans have swept the Jags this season.

When the news of Casey’s comments were tweeted by Pro Football Talk, the Blake Bortles Facts Twitter account turned it up a notch.

Back in 2007, Jurrell’s older brother was found guilty of first-degree murder and shooting at an occupied vehicle. He was sentenced to life in prison. Months earlier, he had secured a full scholarship to play football at the University of Oregon.

The internet had mixed emotions on the dagger.

He’s talking football, and you’re going after his family. Not cool man…

What’s more trash, this comment or the city of Jacksonville?

This ones a little much, don't you think?