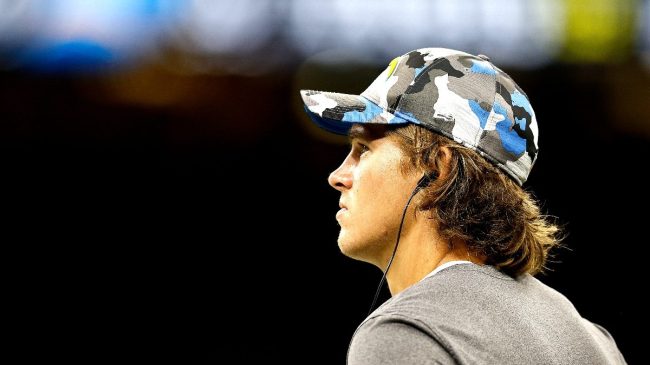 Justin Herbert has taken the NFL world by storm since becoming the starting quarterback for the LA Chargers in his rookie year. He’s immediately become a superstar in the league, as his arm talent is far superior to most. However, his coaches reveal what truly makes the young quarterback unique, and it has nothing to do with Herbert’s arm.

According to the Ringer, Shane Day, the Chargers quarterbacks coach was asked to “pick out the best play he’d seen Justin Herbert make during their first year working together.” After pondering the question for a moment, Day finally came up with an answer and it’s the most random play imaginable.

It’s not a bomb down the field or any other spectacular highlight Herbert has made for the Chargers offense. No, it was a quick, “four-yard touchdown pass on the opening drive against the Cincinnati Bengals in Week 13,” per the Ringer. It wasn’t even a close game, but this play stood out in Shane Day’s mind for one reason.

1. Herbert fitting this throw in to that window is wild
2. More goalpost cam pic.twitter.com/FWZgzCDXjU

Justin Herbert’s ability to quickly read the defense is what separates him from the rest of the pack. It’s his “superpower,” according to the Chargers quarterbacks coach. In that specific play, Shane Day explains, “Most quarterbacks aren’t able to get through a full-field progression in the open field—and doing it in the red zone, where everything is condensed, basically never happens. But on this play, Herbert considered and dismissed three different options before finally making a throw to Keenan Allen, who was considered a ‘check down’ option.”

So there you have it, folks. The Chargers’ offense gets rolling all thanks to Justin Herbert’s ability to read the defense. It’s something every quarterback must do, but the young quarterback clearly does it at an elite level.