Justin Thomas’ Reaction To His Name Being Butchered At U.S. Open Is Priceless (Video) 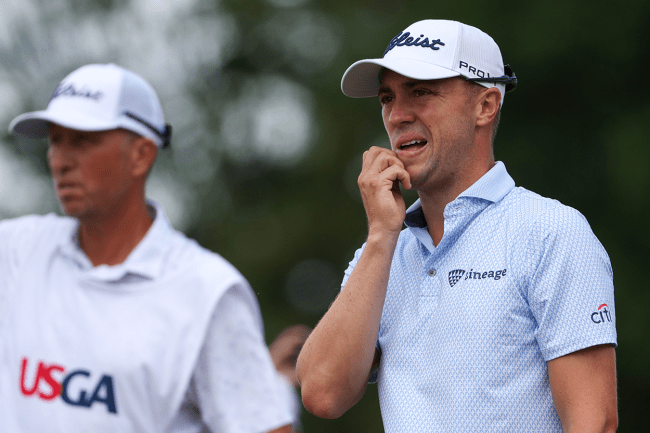 Justin Thomas’ name is about as straight-forward as they come. Justin, Thomas.

However, on Saturday morning, the starter at the U.S. Open found himself unable to get it right. He totally botched Thomas’ name which led to an incredibly hilarious reaction.

As the two-time major champion and reigning PGA champion stepped up to the tee to begin his third round at The Country Club, the announcer called out his name. Not really, but kind of.

Rather than announcing ‘Justin Thomas,’ he accidentally announced ‘Justin Thompson,’ before quickly correcting himself and reintroducing Thomas as, well, Thomas. After hearing the incorrect name, Thomas looked toward the announcer and looked absolutely baffled.

His facial expression was extremely relatable and totally priceless, take a look:

Here’s another look at the incredible expression from Thompson— I mean, Thomas:

Obviously, Thomas is who he is, so the announcer’s mispronunciation was a Freudian slip. It was a total accident and he corrected himself almost immediately.

Even still, the moment was hilarious, so long as it wasn’t a bad omen for Thomas, who began his third round on Saturday in a tie for 33rd at 1-over par. He had a lot of ground to make up on moving day, but his day didn’t get off to the best start, considering the name mix-up on the first tee.