Justin Thomas Puts On A Masterclass To Win The Players 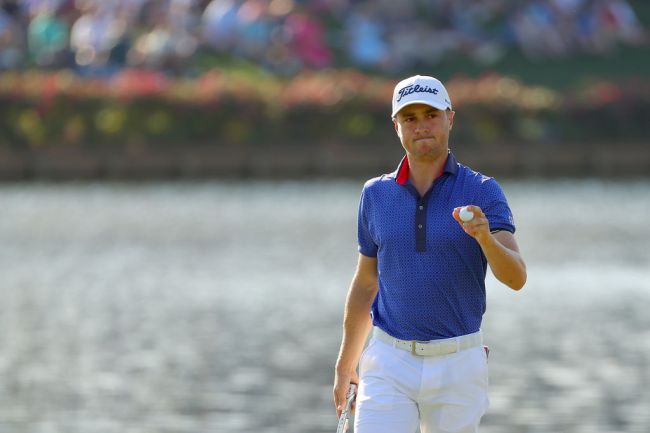 Through the first 27 holes of his Players Championship, Justin Thomas was projected to miss the cut, but after 72 holes, he was standing in the winner’s circle thanks to a masterclass performance on Sunday at TPC Sawgrass.

Thomas carded a final round 68 while hitting 12 of 14 fairways and 17 of 18 greens in regulation. That’s the winning formula anyone is looking for entering a final round three shots back, the difference is, JT was able to execute it.

Following his use of a homophobic slur and the controversy surrounding that and recently losing his grandfather, this win was quite the testament to just the type of player Thomas is, and it was exceptional to watch it all unfold on Sunday. He bottled up all of the emotions he’s undoubtedly felt recently and earned a very impressive win.

Thomas, who played his final 54 holes at 15-under, made seven straight pars to start his round on Sunday. He then stepped to the lengthy Par 3 eighth and hit a brilliant shot onto the green, but three-putted. At that point, it felt like things could have gone one of two ways. JT could have faded away and struggled during his final 10 holes, or forget about the three-putt and flip the switch. He decided to flip the switch.

After the three-putt bogey on eight, Thomas went birdie-birdie-eagle-birdie on his next four holes and bolted to the top of the leaderboard. Thomas knew he would need to birdie the Par 5 16th to achieve any sort of separation from the final group playing behind him, and hit a bold tee shot off the tee before securing a much-needed birdie.

JT with the low hook off 16 tee. So saucy. pic.twitter.com/IFY4sRJroa

While he didn’t hit a great shot onto the 17th green, it found land, and he was able to two-putt from 53 feet, which was a solid moment given the fact he had two three-putts on the day prior to that point.

Thomas’ tee shot on 16 may have been special, but what he managed to pull off with a 5-wood in-hand on 18 tee was extra. He even seemed relieved that the ball didn’t find the drink.

GOOD GRIEF! This line JT took with rope-hook 5-wood on 18 is filthy. May have been a little more bold than he wanted.😂pic.twitter.com/nbB43ausyz

Lee Westwood’s party has now been spoiled in back-to-back weeks, and the Englishman played well posting a 72 on Sunday, but JT’s steady-going, opportunistic round was just too much for anyone else in the field.