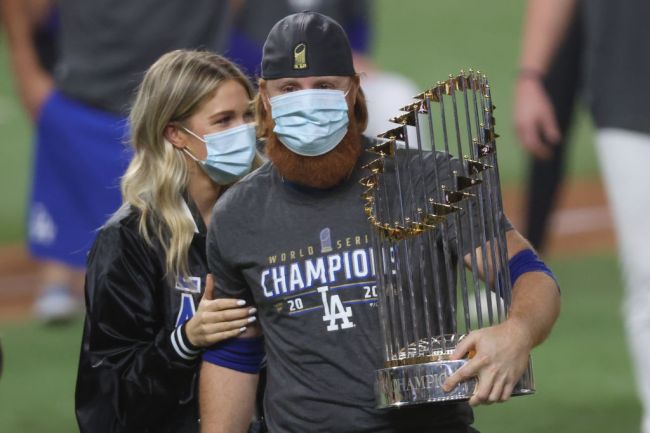 Over a week has gone by since the Dodgers took down the Tampa Rays in Game 6 of the 2020 World Series. In a year of the MLB that was full of chaos and changes to the game unlike anything we have ever seen, the headlines continue to swirl even after the World Series.

Dodgers 3rd baseman Justin Turner has finally spoken out on the controversy surrounding his post-game celebration with his teammates after testing positive with COVID-19 and learning of the results during the game.

“Winning the World Series was my lifelong dream and the culmination of everything I worked for in my career. After waiting in the isolation room while my teammates celebrated on the field, I asked whether I was permitted to return to Sheffield with my wife in order to take a photograph. I assumed at that point that few people were left on the field. I was under the impression that team officials did not object to my returning to the field for a picture with my wife.”

“However, what was intended to be a photo, capturing the two of us, turned into several greetings and photos where I briefly and unwisely removed my mask. In hindsight, I should have waited until the field was clear of others to take that photo with my wife. I sincerely apologize to everyone on the field for failing to appreciate the risks of returning to the field. I have spoken with almost every teammate, coach, and staff member and my intentions were never to make anyone uncomfortable or put anyone at further risk.”

Whether you can sympathize with Turner or not, one can be understandably left puzzled as to why Turner would wait this long to release a statement on an issue so severe. The statement comes over a week after the incident that ended up being one of the top stories in sports. Perhaps Turner was waiting for the MLB to wrap up its investigation into the incident or the champagne from the night of the Dodgers’ first World Series win since 1965 had finally worn off.

Major League Baseball has completed its investigation of the events following the Los Angeles Dodgers Victory in Game Six of the World Series. The following statements from MLB, Justin Turner, and the Dodgers were released today. pic.twitter.com/cVu1E6g7lT