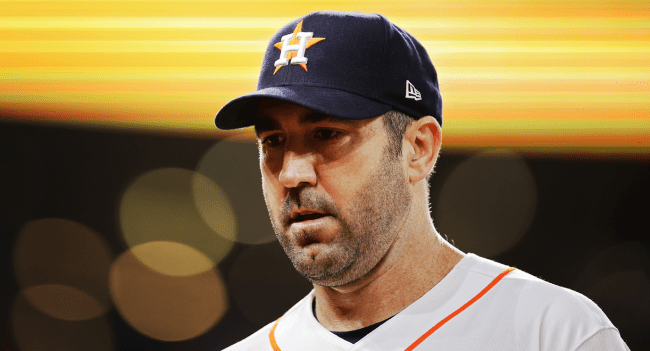 Back in the day, if a manager had tried to pull Justin Verlander from a no-hitter after throwing jusy 91 pitches he would have had a fight on his hands.

Tuesday night, when Houston Astros manager Dusty Baker did just that, Verlander says he had no problem with it.

“After six innings at 91 pitches, you know it’s not going to be one of those nights,” Verlander said after the game. “Maybe 15 years ago, 10 years ago when I loved throwing 130-something. But not now and specifically not after Tommy John in my first season back. It was a pretty easy conversation.”

“It was a pretty easy conversation. I talked to Maldy, I talked to Miller (pitching coach) and we all agreed that it was the right decision,” said Astros pitcher Justin Verlander on coming out of the game with a no-hitter in the sixth inning against the Twins. #LevelUp #Sarge pic.twitter.com/Z7WFm2o30B

The 39-year-old, who missed almost two full seasons after Tommy John surgery in 2020, also added, “I like to go deep in games in the regular season, but I’d rather do it in the postseason or at least be fresh and strong for that.”

Astros manager Dusty Baker said that Verlander was on a pitch count of 90 due to the team transitioning from a six-man rotation to a five-man, but even so, he did ask Verlander if he wanted to keep going before taking him out of the game.

“He’s older and wiser and realizes what’s at stake, and he realizes that we’ve still got 38 games to go and hopefully, a whole lot more,” Baker said. “He’s looking at the big picture versus just today or being selfish-minded, which he’s not. He’s thinking about the team and himself.”

Naturally, despite it being a pretty smart move, many baseball oldheads took issue with Verlander beig removed from a no-hitter after just six innings.

So he was pulled after 6 perfect innings? Because of let me guess… a pitch count? People continue to sap all the fun out of sports.

They pulled him from a perfect game! MLB has turned into ballet these days.

Shouldn't have pulled him smh 🤦

Verlander, who has thrown three no-hitters in his career, now holds a 16-3 record with a league leading ERA of 1.67. With his 10 strikeouts Tuesday night, he passed Pedro Martinez and Max Scherzer on the all time striekout list and now has 148 in 149 innings pitched with just 25 walks and may be on his way to winning the third Cy Young Award of his career.