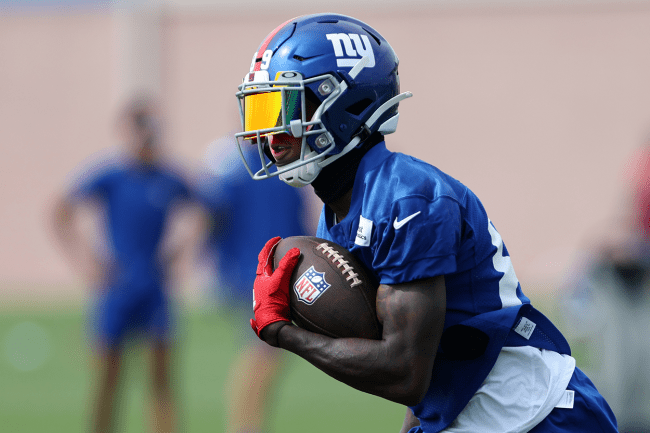 Kadarius Toney is coming off of a disappointing rookie season in the NFL, but is bringing the ice in Year 2. The No. 20 overall pick in the 2021 NFL Draft is hoping that things start to turn around this fall and, by all accounts, he is well on his way.

Toney, who only appeared in 10 games last season, still finished the year as the Giants’ second-leading receiver. The 39 catches for 420 yards and no touchdowns was a huge letdown, but very little blame could be pointed in his direction. New York’s offense was terrible.

As a result, the team fired Joe Judge during the offseason and brought in Brian Daboll. Daboll, who has spent the last few years leading Buffalo’s offense, is bringing reinvigorated hope to what the G-Men can do.

Toney, who broke Odell Beckham Jr.’s single game receiving record with the Giants by catching 10 balls for 189 yards against the Cowboys, showed promise. He will be a big part of the team’s production this year and Daboll is putting extra emphasis on the second-year receiver, letting him know that he is a crucial component to the team.

As Toney prepares for what he hopes will be a breakout season, he brought the drip to training camp on Monday and showed up in a custom Louis Vuitton visor. It went crazy.

Because you all loved the visor 🥶 pic.twitter.com/nGZqDKbtUg

As cool as the visor is, it also serves as a great reminder that the NFL is the No Fun League. Per NFL rules, Toney cannot wear the Louis Vuitton visor during a game.

While the rules on uniformity and consistency make sense to some extent, there is no reason that Toney rocking a custom visor should be an issue. In fact, it would only boost fan interest because cool things are cool and fun is fun. Lame.