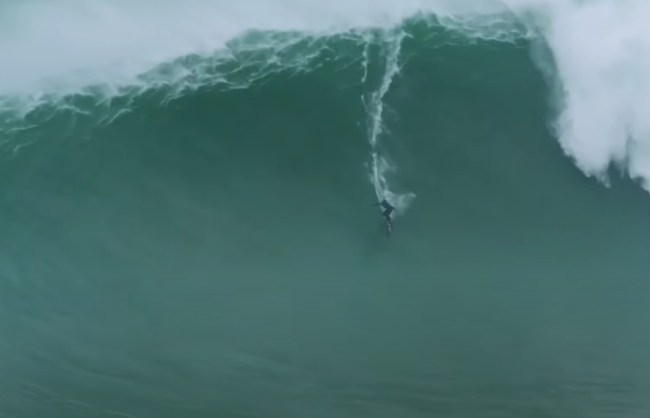 This annual award is presented by the World Surf League to the surfer who rides the biggest wave anywhere in the world and Hawaii’s Kai Lenny charged this absolute beast of a wave in front of crowd standing on the shore. Nazaré is a tiny fishing village about halfway between Porto and Lisbon and the unique underwater mountain right off the shore has made it home to the largest waves in the world when it’s firing.

It’s also unique in that the waves break so close to the shore spectators can literally stand on the hillside and seawall and watch as surfers ride the largest waves on the planet instead of craning to see surfers hundreds of yards out into the water. This also means we get some sick views of the rides that don’t have to be filmed from a helicopter.

You might’ve seen Kai Lenny’s 2020 XXL Biggest Wave Award wave by now since the footage has been making the rounds since the Nazaré Challenge but it’s always worth watching again because it’s so damn impressive. Check it out:

Kai Lenny is the ultimate ‘waterman’. The dude absolutely charges anything that glides on the water. Here he is yesterday:

That Nazaré wave won the XXL Biggest Wave Award but there was A LOT of great contenders this year. If you want to catch up on the best big wave rides of the year then here’s the montage the WSL released a few days back:

It will be interesting to see what the 2020/20201 Big Wave Surfing calendar looks like as the potential of a vaccine opening up travel is looming on the horizon but without that Americans will remain mostly confined to our own borders and a tiny handful of nations allowing us in.