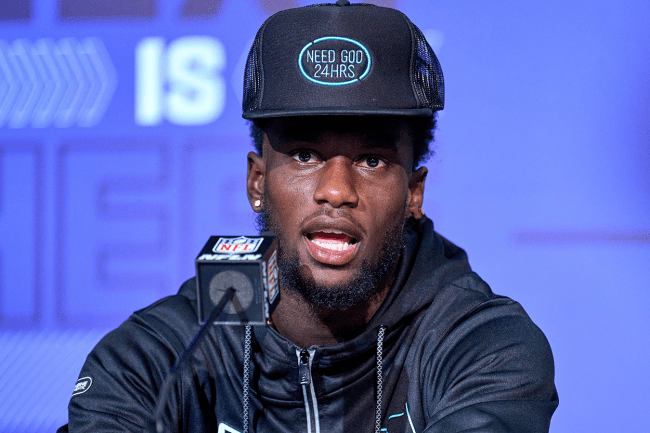 With the No. 23 overall pick in the 2022 NFL Draft, the Buffalo Bills selected Florida defensive back Kaiir Elam. The team traded up to select him, so there must have been an unwavering desire to get him to northern New York.

Part of that desire likely came from his pre-draft interview.

Prior to every NFL Draft pick, there is a lot that goes on behind the scenes. Obviously.

Coaches, scouts and staffers spend countless hours watching tape, breaking down workouts and looking into numbers. All of those are tangibles.

But a large part of what goes into the process includes the intangibles. How could a prospect’s frame develop? How is his on-field intelligence? Does he put in the work off of the field to get bigger, stronger and faster? Does he put in the work with film and playbooks? Can he handle himself in a professional setting? Where does he fit in the locker room?

All of those questions, and countless others, factors into a player being drafted.

To get a feel for the answer to some of those questions, the interview process is key. Teams speak to players at the NFL Combine, at their homes, and even bring them to team facilities if necessary.

It’s an intimidating process, especially for most 19 to 23-year-olds.

A behind-the-scenes look at the Buffalo Bills’ interview with Kaair Elam puts the pre-NFL Draft business into perspective.

There are a lot of people hanging on your every word, scrutinizing every last thing that is said. Overwhelming and nerve-racking would be an understatement. Take a look:

A glimpse into Kaiir Elam's Combine interview with the Bills pic.twitter.com/ADSU6p64fi

Obviously, considering that the Bills traded up to take him in the first round, Elam knocked it out of the water. His notebook is impressive and his attitude on the field is a delight.

Kaiir Elam is an All-American at being happy for his teammates pic.twitter.com/tYZGMtWN9s

Lions linebacker Alex Anzalone, who was drafted in the third round in 2017, spoke about the pre-Draft interview and give Elam major props.

This has to be the most difficult job interview for a young person in the world. Fresh out of college and 50 people sitting around you, analyzing your every word and move. Probing into your work life and also personal life. Props to Kaiir!!! https://t.co/V4k6blO6H0

Elam’s ceiling is limitless and if he keeps building on what he can do better, his role in Buffalo is going to be a big one.