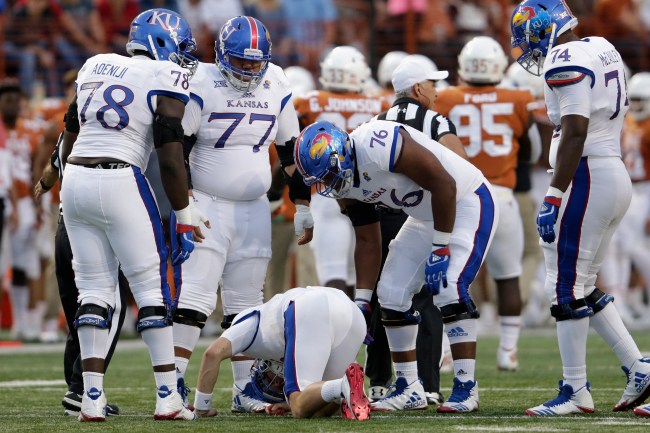 Kansas football is the redheaded stepchild with braces of the University of Kansas. Kansas basketball is one of the most storied programs in the country–hell, the inventor of the damn game was Kansas’ first coach.

The football team, on the other hand, well, lets drill down into the team’s record dating back to 2011:

Hell, all of those seasons combined barely add up to one perfect season.

I mean, tell me what this is…

Kansas students are fed up. So fed up that they created a website–savekffb.com–with the objective to get Kansas Athletic Director Sheahon Zenger fired. Zenger, who makes $700,000 a year, has had very little success igniting the football team since his takeover in 2011.

The Kansas fans behind savekffb.com believed that they needed actual real estate to truly express their message. So, they bought a billboard in Topeka, Kansas.

The billboard features a quote from ESPN personality Dan Le Batard following Kansas’ 43-0 loss to TCU back in October, when Kansas racked up a total of 21 yards of offense in the game.

The billboard was reportedly taken down less than 24 hours after it was erected and fans suspect that the Kansas Athletic Department had something to do with it.

Kansas football faces not only the toughest schedule in the Big 12 in 2018, but one of the toughest in the country. If they don’t pull out a win against Nicholls State in the season opener this year, fans may burn the damn campus to the ground.