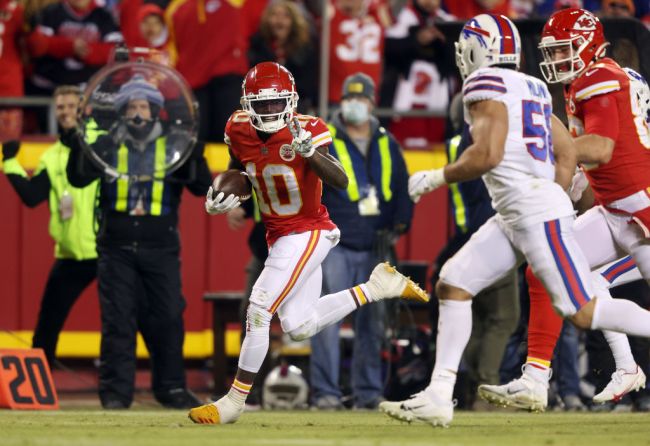 It seemed last week like the Kansas City Chiefs had made all of the moves they were going to make at wide receiver for this offseason. They had already signed Juju Smith-Schuster and then added Marquez Valdes-Scantling to help fill the void left behind by Tyreek Hill. The Chiefs also still have Travis Kelce and Mecole Hardman still figured to be involved in the offense.

Still, it seems that isn’t enough for the Chiefs. According to ESPN’s Dianna Russini, the Chiefs are still looking to add another receiver to really replace Hill on their roster.

This news comes as a bit of a surprise considering Andy Reid blamed the salary cap for the Tyreek Hill trade while speaking at the NFL meetings yesterday.

“We came in aggressive [with a contract offer], and after we got to a point, we just said, ‘Listen, in this day and age you have issues you have to deal with with the cap.’ So we felt like it was better to allow him to go ahead and be traded. … You can go different routes with a player. You can play hardball or you can go about it the way I did, or we did.”

“You’ve got to be able to manage that the right way,” Reid said. “If you’re paying all of your money to a quarterback and you can’t surround him with players, that can be a problem. So you have to find a way with a Tyreek Hill maybe that you have to get rid of so you can replenish. That’s offense and defense. I’m not just talking about the offensive side.”

Still, there are a few big moves that could be feasible for the Chiefs and would carry a much smaller cap hit than Tyreek Hill’s new contract. There have been reports in recent days about teams monitoring the availability of DK Metcalf and AJ Brown. Both are still on rookie deals and AJ Brown sparked some trade speculation over the weekend with a cryptic tweet.

There is also Metcalf’s teammate, Tyler Lockett, who could be on the move depending on how the Seahawks choose to handle a roster without a viable quarterback. Lockett would only carry a cap hit around $10 million dollars this year and $17 million next year.

The Chiefs could also always look to the draft for a receiver as well. They have two first round picks and while most of the big names at receiver will be gone by the time their picks come around, there may still be somebody they feel comfortable drafting there.

Whatever the move may be, it seems we haven’t heard the last of the Kansas City Chiefs this offseason.