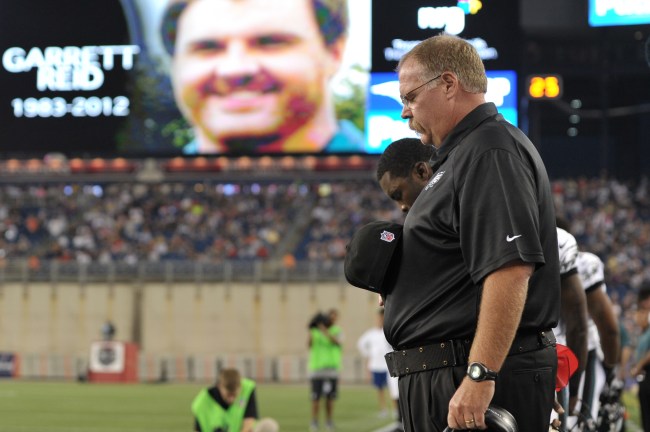 “Andy Reid does not have a great record of fixing players. He doesn’t. Discipline is not his thing. It did not work out particularly well in his family life. That needs to be added to this, as we’re talking about the Chiefs. He wasn’t really great at that either. He’s had a lot of things go bad on him. Family and players. He is not good at fixing people, he is not good at discipline. That is not his strength, his strength is designing football plays.”

Reid’s son, Garrett, died of a heroin overdose in 2012 at Eagles training camp, where he had been assisting the Eagles strength and conditioning coach. Investigators found Garrett slumped over in a chair next to a “used syringe, spoon and 19 vials of an unknown liquid substance in his room, along with many unused needles and syringes.”

Kietzman’s statement was as idiotic as it was out of line. Claiming that some good old fashioned discipline is the antidote to addiction is as simplistic a viewpoint as humanly possible.

Kietzman did his best “that’s not what I meant!” act, but it just didn’t square up with his comments.

Holy hat what’s going on here? I never mentioned one word about the tragic death of Andy Reid’s son and quickly corrected a caller who did. I was talking about the owner’s record of “fixing” players, the team’s record and Andy’s record. I was referencing the drug (1/3)

addiction and convictions for dealing drugs. When they served time and Reid hired them to work for his football teams, it was no longer a private matter. But blaming a parent for the death of their child in these circumstances is unthinkable and reprehensible. Period. It (2/3)

was NEVER mentioned or discussed and NEVER entered my mind. It makes me sad that somehow that’s what some of you thought I was saying. That would be despicable. (3/3)

Kietzman eventually took responsibility of his comments (somewhat) by apologizing to the Reid family on air.

The station then announced Kietzman would be taken off the air indefinitely as it reviews the matter.