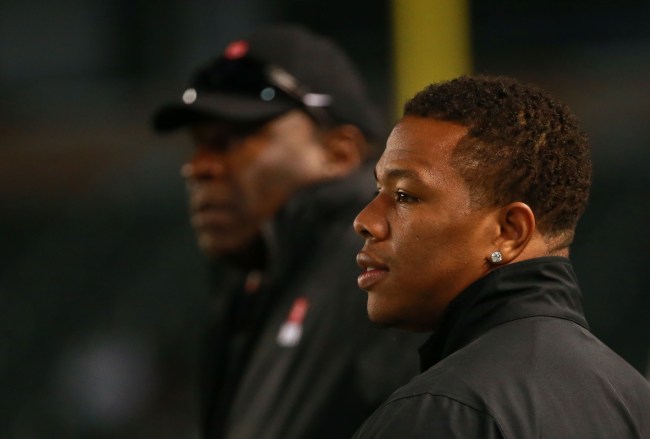 Kareem Hunt may have seen his NFL career (potentially) come to an end following a disgusting video that showed him pushing and kicking a woman in a Cleveland hotel earlier this year, but one person who wants to help him in his pursuit of overcoming the issue is someone who has been there himself, Ray Rice. As most of us remember, Rice was seen cold-cocking a woman in a hotel elevator back in 2014 in a disturbing video — ending his NFL career — but has since educated himself about domestic violence, while working with organizations to try and eliminate domestic violence.

According to NFL.com, Rice says he wants to be there to help Kareem Hunt, offering to “help him figure out” what happened that night, and to remind him that the incident that happened in the video “shouldn’t be the moment that defines you.” Here’s all that Ray Rice had to say to NFL.com

“You look back at it and obviously you see some similarities between what happened in my situation,” Rice said Saturday in an exclusive interview with NFL.com. “I’m never going to call myself an expert. I’ve [publicly] discussed the remorse I have for survivors of domestic violence, but knowing what I know now the top priority is learning that it comes down to those split-second decisions, which come at the most hostile times. And that’s where this could be a teaching tool.”

Rice went on to say he’d be willing to speak with Hunt if Hunt would discuss his issues that led to that horrific moment.

“Peer-to-peer, I would definitely try to help him figure out, ‘How can we start dealing with the underlying problems in your life?'” Rice said. “Because he has a long life to live, this will be a defining moment, but it shouldn’t be the moment that defines you. For me, I just see you have a long life to live and that doesn’t mean just playing football — you need to just live one day at a time.”

What would Rice tell Hunt, if he could, right before Hunt made the first aggressive move toward the woman in the video?

“In that moment right there, you go back and you think about your own self,” Rice said. “First, I would look at the situation and say, ‘How did I even get in that moment, because whatever what was done in that moment, something transpired before it even got there. And honestly, while I don’t know if alcohol or any substances were involved, I know those things can often play a role. I am not blaming anyone who was with him, but I wish someone that was with him, if he’s not in his right mind … would’ve said to him, ‘Look at the situation. Is it worth risking it all for a split-second decision — for something you know you can get out of?'”

It’s an interesting dynamic between two similar situations, with Kareem Hunt’s recent video looking eerily similar to that of Rice’s. And, while it’s easy to remember how graphic Rice’s incident was, for what it’s worth, he has put in a lot of work to try to help others from avoiding such situations, speaking to Alabama, Ohio State, Georgia, Notre Dame and several other top schools, as well as talking at the Big 12 Seminar and the NFL Players Association rookie program. Rice also has worked with worked with and learned from organizations like A Call to Men and the Childhood Domestic Violence Association.

After seeing Kareem Hunt’s interview this morning on ESPN — his first public appearance since the video surfaced and the Chiefs released him — it’s clear the 23-year-old could use some mentoring to help use this life-changing moment to educate himself and try to help others from avoiding the same fate. So good on Ray Rice for at least offering to help.