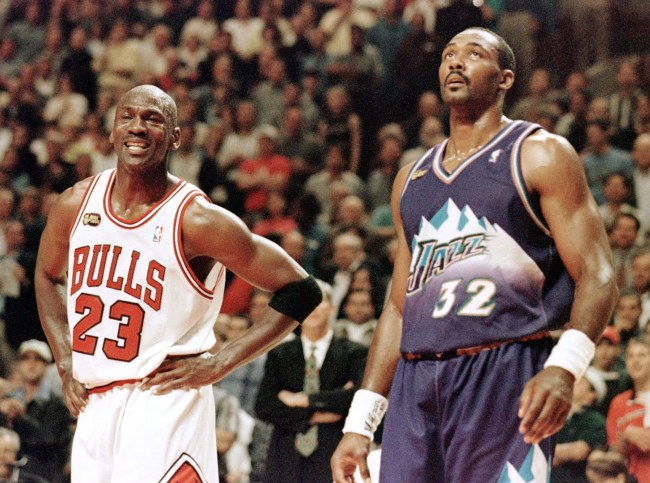 It’s been over 20 years since Karl Malone lost back to back NBA finals to Michael Jordan and the Bulls and he still seems salty about it.

According to “The Last Dance: director Jason Hehir, Malone wanted no part in a documentary on Jordan and refused to be interviewed for two years.

Via The Dan Patrick show

“He declined through another party,” Hehir said. “We asked him multiple times. Believe me, we exhausted just about every avenue. We started in January 2018 on that one because we knew that (Malone) was gonna be a tough sell.”

Hehir admitted that his team persistently pursued Malone throughout the entire process of the documentary, but he wouldn’t budge — even after Stockton agreed to talk.

“We tried to get them to sit down together. Thought that might be a better option and (Malone would) feel more comfortable with that, but there was just no convincing him,” Hehir said

On Wednesday ESPN’s E60 unearthed an interview with Malone and he didn’t seem too pleased to be asked about MJ.

I have the utmost respect for Michael, but I never thought I was playing Michael Jordan. I was playing the Chicago Bulls, Everybody says this person was a bad man and all that. Well, yes, I give them respect. But I’ve got a setup. I’m a man, and I was a bad son of a b****, too, so that’s how I look at that, and that’s who I am,

Malone clearly isn’t a fan of all the fanfare Jordan got at the end of his career, unfortunately for him MJ was the victor and has the rings to back it up.