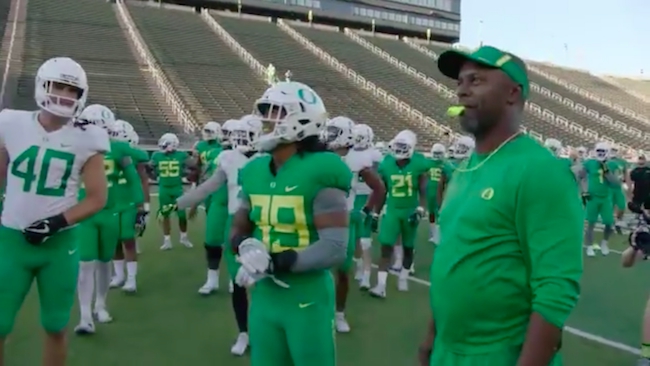 If you’re looking for something that will instantly put you in a good mood, it’s hard to go wrong with videos of college football players being surprised with scholarships. There aren’t many things better than watching a walk-on get mobbed by his teammates after being rewarded for working his ass off in practice day in and day out—especially when you consider how life-changing getting a full ride can be.

Teams have come up with increasingly creative ways to reveal the news to their players over the past few years, and this video from the University of Oregon is one of the coolest ones I’ve seen. According to The Oregonian, Kaulana Apelu was a promising high school prospect who suffered a major setback when he tore both of his ACLs in high school before accepting a walk-on offer from the Ducks.

On Sunday, practice was interrupted by a video message from Apelu’s mom, who informed the junior linebacker that he’d been rewarded with a full scholarship for his hard-work.

"If you have a dream, never give up. Always chase it." – Kaulana Apelu, Oregon's newest scholarship student-athlete. #GoDucks #DoSomething pic.twitter.com/ETqasbtL54