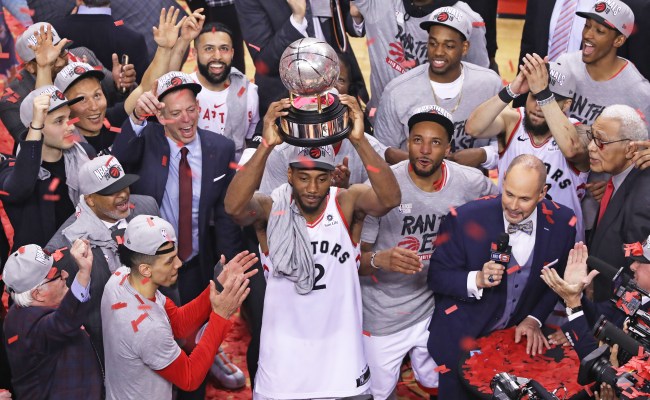 Kawhi Leonard is, arguably, the best two-way player in the NBA right now, having led his Toronto Raptors to the NBA Finals to take on the two-time defending champion Golden State Warriors. Along the way, we’ve seen the All-Star hit a game-winning (and series-clinching) buzzer-beater, drop 30-plus points on numerous teams while defending at a high level, and win four-straight over the best team in the NBA, the Milwaukee Bucks, by shutting down the probable league MVP, Giannis Antetokounmpo, to reach the Finals. Overall, it’s been a helluva postseason for the guy.

Given all that he’s accomplished lately, there are some people wondering if Kawhi Leonard’s now thrust himself into the “greatest player in the league” conversation. Sure, there are a ton of guys who weekly get tossed in there, but given Leonard’s recent level of play — and throughout his career — one make the argument that the 27-year-old has ascended into that category. And one person who seems to think that Leonard’s already there? Los Angeles Clippers head coach Doc Rivers, who even went as far as saying the superstar player is the “most like (Michael) Jordan we’ve ever seen.”

“He is the most like Jordan that we’ve seen,” Rivers said of the Toronto Raptors star. “… Not that he is Jordan or anything like that, but he’s the most like him. Big hands, post game, can finish, great leaper, great defender, in-between game, if you beat him to the spot he bumps you off and then you add his three-point shooting.”

And, because these types of things can always use a little video proof, take a look at the discussion below.

Now, don’t get me wrong, Kawhi Leonard is an absolute freak athlete. He’s got huge hands, he’s strong, he’s got that “it” factor that most players need to even be mentioned in the same breath as Michael Jordan, and he’s guided his team to the NBA Finals — which, should he win it, then he really deserves all the MJ comparisons. But it’s hard not to think that Doc Rivers’ words come as a free agent pitch for Leonard, right?

Remember, not only is Kawhi set to become one of the top superstars on the market once the season ends, but he’s also been linked to the Los Angeles Clippers, Rivers’ team, for a while now, with Caesars Palace even giving the Clips the best current odds of landing the All-Star forward.

Anyone crying about tampering from Rivers should hush up, but, damn, it sure feels as if his appearance on ESPN to talk about Kawhi Leonard and the NBA Finals had a specific reason behind it — and, if it helps lead to the team landing Leonard this summer, it was more than a wise move. With reports surfacing that the Clippers are more intriguing than the Lakers this offseason, Rivers’ move here seems to be genius, especially given all the turmoil going on with their in-city rivals right now.