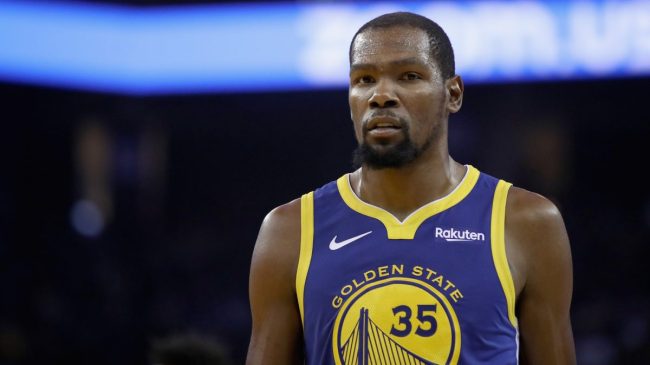 Kevin Durant is not happy with Draymond Green’s most recent comments about the Warriors’ NBA title teams from 2017 and 2018. In a recent podcast appearance, Green seemed to single out Durant as a way of proving that Steph Curry was more impactful in landing those championships.

This despite the fact that KD won back-to-back Finals MVP awards.

“They need those shiny objects for them to be able to analyze what’s going on… Steph Curry got double teamed 7X the amount KD did…the impact he has on a game, if you don’t understand basketball, you’re going to say he needs a FMVP to validate who he is.” – Dray on Steph/FMVP pic.twitter.com/G5fY0olGLR

While Green notes the high level of play that Durant performed at in those Finals victories, he then discredits the production by saying that Steph Curry was a more impactful player.

“Steph Curry got double teamed probably seven times the amount that KD did in a given series… Yet, the guy still averages, I’m not sure what his Finals average is, but I’d be willing to bet my bottom dollar it’s north of 23 points. So, the impact that he has on the game, if you don’t understand basketball, then you’re going to come out and you’re going to say, ‘He needs to validate that by [winning] a Finals MVP.'”

Durant says that Green is 100% false in his assessment, at least according to his own personal view. He would go on to double down on the stance in a Twitter debate with followers.

One fan says that maybe scheme and position led to Green’s comments. Steph was more of a ball handler than KD, leading to more double team opportunities. Durant says that the thought that Curry was double teamed more, though, is a “blatant lie” no matter the scheme.

This never happened to steph while I was there, blatant lie

Durant took this as a shot from Green. He sees it as a way of discrediting his role on those championship teams.

But u refuse to state the benefits of having me on that team too, see that’s where the discrediting comes in.

Now this isn’t the first time KD has fired off at Draymond. The two had a beef while teammates in Golden State which Durant says ultimately led to his departure from the Warriors.

Draymond Green bit back on Twitter, telling Durant that “listen to full takes” before getting baited into tweeting.

You have to learn to listen to full takes and not snippets before you get baited into tweeting Champ. https://t.co/2dU2MleteJ

Oh I seen it my brethren, I appreciate the compliments but I disagree with what u said about double teams that’s all. I love the show https://t.co/6M18Ez1Vpr

The two still don’t agree, but that’s probably as much closure as we’ll get on the situation.