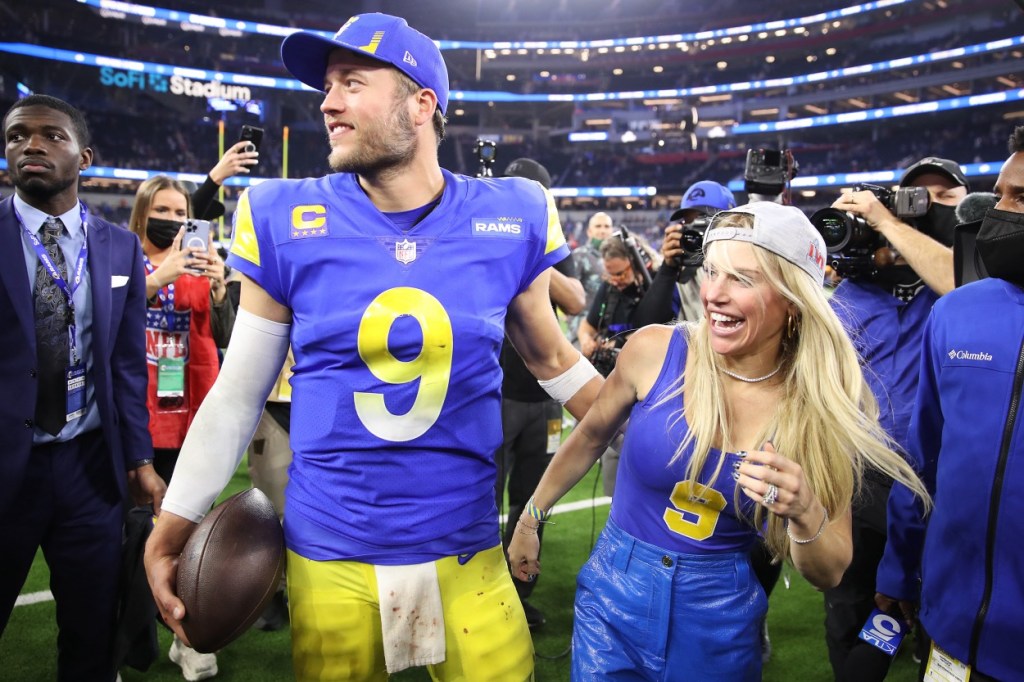 The Los Angeles Rams are one win away from winning the city of LA a Super Bowl at home. The move for Matthew and Kelly Stafford from Detroit to Los Angeles has already led to him playing in the biggest game there is just one season into the move.

Interestingly, the Cincinnati Bengals are listed as the official ‘home team’ instead of Los Angeles even though the Super Bowl will be played at their home stadium. That move from the NFL led to an extension of ‘the Rams are never the home team’ jokes because many fans from opposing teams fill the seats in Los Angeles.

Maintaining a home-field advantage for the Los Angeles in the NFC Championship against in-state rival San Francisco 49ers was a huge talking point last week. The Rams initially put a geo-fence around who could buy tickets and only people with billing zip codes in the greater LA area were eligible (not SF). Later in the week, Rams QB Matthew Stafford’s wife announced her plan to keep as many 49ers fans out of good seats as possible.

Kelly Stafford announced her plan on Instagram last week (details right below) and just gave us an update on how that went:

Just went on Ticketmaster and saw how expensive tickets are getting. I’m going to buy a good amount and give them away. If you are a hardcore rams fan, or just a regular rams fan, a veteran, active in the military, a public servant, etc.. email me at staffgiveback@gmail.com and tell me your story with some photos attached! I’ll get back to y’all by tomorrow night!!

On the latest episode of The morning after with Kelly Stafford, Kelly’s podcast, she shared just how expensive this endeavor got. She didn’t call out a specific number but she gave us a range of prices and shared how many tickets she bought. Based on her quotes below we can run some math to see how much or how little she and Matthew Stafford spent.

Kelly said she made sure not a single fan was in the 500 level. Everyone she sent to the game was in ‘the good seats.’ She says the tickets I was buying ranged from like $850 to $1,200 apiece. We ended up sending like 240 people. Unreal. I’m just so happy for them.”

She added how overjoyed she was that “they got to experience (it). They have that memory. There were fathers and daughters going. There were husbands and wives when the husband was about to get deployed. (It was) a memory to hold onto and have the rest of (their) lives. And that’s what life is about.”

But at the end of the day, Matthew and Kelly Stafford are straight-up wealthy. They’re ‘party with Leonardo DiCaprio on private islands during vacation’ levels of wealthy. Matthew Stafford has made $246,506,037 in career earnings just playing in the NFL and not including endorsements. So $250K is just a drop in the bucket for them.

Also, if you haven’t read that story about Leonardo DiCaprio challenging them to a series of weird competitions and licking faces on vacation, read it now.

With the Super Bowl being held in Los Angeles this could be the first time in a while the LA Rams have a commanding home-field advantage. It’s not uncommon for the teams in the Super Bowl to get less than 15% of the available tickets with the vast vast VAST majority of tickets going to sponsors and VIPs. It doesn’t seem unreasonable to assume that those sponsors will be in LA and will likely root for the team whose venue they are paying to sponsor for the Super Bowl.