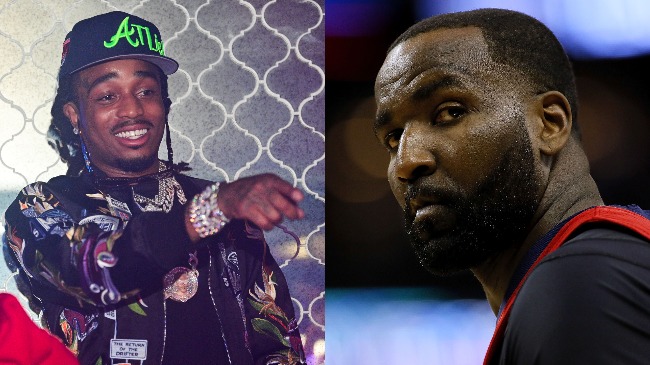 Drake on Devin Booker (Sicko Mode): “See the shots that I took, wet like I’m Book.”

“I pray for Markelle ’cause they (expletive) up his shot,

Just want you to know that you got it

Though I never met you, I know that you special

And that the Lord blessed you, don’t doubt it

Jay-Z on Nick Van Exel (Crazy In Love): “The ROC handle like Van Exel, I shake phonies, man, you can’t get next to”

One of these lyrics is not like the other, and Kendrick Perkins had every right to feel victimized by Quavo in his 2018 debut studio album, Quavo Huncho.

Perkins, who enjoyed a 12-year career in the NBA (the overwhelming majority featuring him as a starter), took great exception to the 2018 jab, and a year later appeared on Fair Game With Kristine Leahy to reveal that the hatchet had very much not been buried.

.@QuavoStuntin and @KendrickPerkins have BEEF after the rapper tried to diss Perkins in a song 😤😤😤

"You need to stick to staying with the Migos and not going solo." 🤭 pic.twitter.com/CMBSMfvJke

“He tried to like diss me, he tried to say something like, he was talking about getting a girl’s number, and he was like, ‘no playing time, Kendrick Perkins.’ So I was like uh, no… and you need to stick to staying with the Migos and not going solo. I kinda wanted to fire back because his album flopped anyway, I mean it was trash but I was just like why are these little dudes coming after me? Like, first of all, what is your problem?” [transcribed by Complex]

Flash forward to this week, in the lead-up to Migos’ latest album Culture III releasing June 11, Perkins took to Twitter to take the first swing at Quavo, likely as a defense mechanism in the event he’s mentioned in Culture III.

I see @QuavoStuntin still dropping them trash a$$ bars!!! Carry on…

When Quavo responded with a photo of an emoji fist under the chin of Perk, the NBA champion responded with a dagger that mocked his debut studio album which received overwhelmingly negative reviews and was criticized for being overly-bloated and sloppy on the editing.

Thank God you’re back with the Migos because this photoshop uppercut is as close as you’ll ever get to a hit as a solo artist! Carry on… https://t.co/nVOrvsaLIA

Perk lives for battles, rappers are no exception.