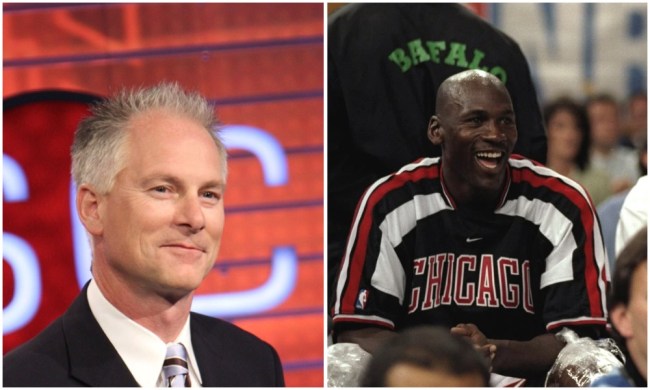 The first two episodes of ‘The Last Dance‘ documentary premiered on Sunday and they lived up to the hype. The two episodes gave us some incredible stories and different insight on the 1997-98 Bulls squad that has everyone already looking forward to next Sunday for the third and fourth episodes.

ESPN also got creative with its ads during the premiere. During the documentary, the screen flashed to the old set of Sportscenter and the desk of Kenny Mayne. Mayne went on to announce that the Bulls had now “won their second three-peat” and that the network would one day make a documentary about the accomplishments.

“This is the kind of stuff that ESPN will eventually make a documentary about, they’ll call it something like ‘The Last Dance,’ make it a 10-part series and release it in the year 2020.”

The ad, which was in partnership with State Farm, surprised a lot of people during the documentary seeing as how it looks completely legit, but it turns out that it was made using an old broadcast clip that Mayne simply voiced over.

If there is one ESPN personality that may actually own a time machine or can see into the future, Mayne being that person wouldn’t be all that surprising.

Related: Michael Jordan Gets Blasted By The Internet After He Called Scottie Pippen ‘Selfish’ For Trying To Renegotiate Terrible Contract With The Bulls