Kenny Smith Digs Own Grave, Absolutely YEETS Shaq Through An Xmas Tree And Into Another Dimension 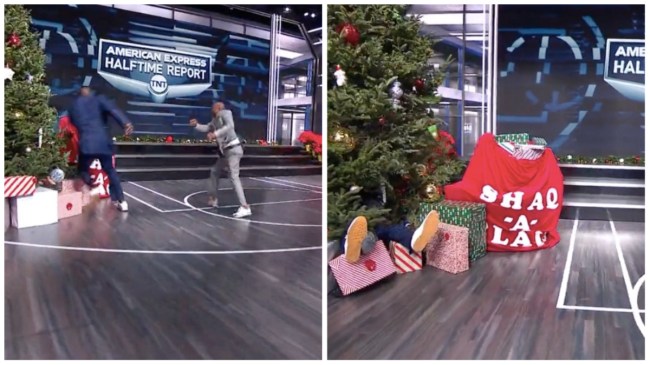 Tis’ the season. Well, *almost* tis’ the season, that is. No, I’m not talking about Christmas — I’m talking about basketball season, and therefore, by extension, Inside The NBA season, one of the funniest shows on television. Period.

Given that basketball is behind football (the worldly version), football (the American version), and baseball (the only version) when it comes to my favorite sports, I don’t usually start tuning into NBA until at least the New Year, but more likely, once the NFL season concludes, which usually coincides with the NBA’s trade deadline.

The only reason I would consider tuning into NBA games earlier in the season, though, are the hilarious likes of Charles Barkley, Shaq, Kenny Smith, and Ernie Johnson on Inside The NBA — a TV show so funny that Bill Hader recently claimed comedians will cite it as one of the funniest programs on television.

"I have friends who are in comedy who aren’t even basketball fans, and they’ll send me clips of your guys’ show.”

Unfortunately, though, Kenny Smith may not be a part of Inside The NBA much longer as the former Houston Rockets guard might have signed his own death warrant.

During the Tuesday night episode of the show, Kenny and Shaq had one of their trademark foot races to the touchscreen. Perhaps thinking Shaq had him beat, Kenny hit him with a shoulder check that sent Shaq flying into the set’s gigantic Christmas tree, virtually disappearing in the process.

The reason that this will likely spell trouble for Kenny, of course, is that Shaq — who obviously found the moment hilarious given his reaction — dusted the pine needles off his suit before declaring that “This means war, Kenny.”

All jokes aside, though, NBA fans should be thrilled to know that the Inside The NBA crew is going to be sticking around for a while as it was reported in October that Warner Bros. Discovery had inked Chuck, Shaq, Kenny, and Ernie to new deals. Barkley’s deal, according to reports, is set to last for 10 years.

RELATED: Charles Barkley Sends Message To Michael Jordan – ‘Let’s Get Past This B.S. & Go Back To Playing Golf & Having Fun’