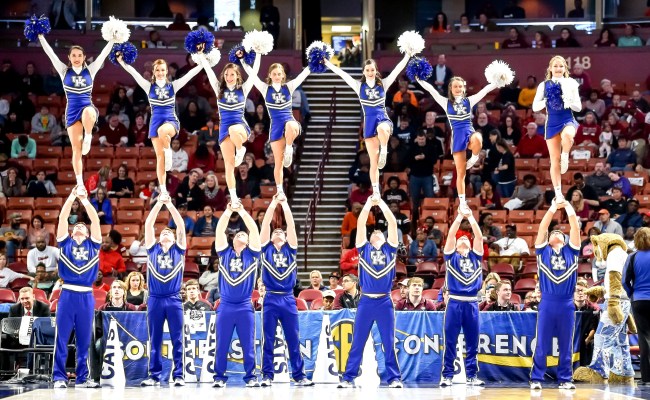 On Monday, the University of Kentucky announced that it was firing the entire coaching staff of their cheerleading squad following an investigation into allegations including hazing, alcohol and public nudity.

A three-month investigation found the coaching staff and administrative advisor failed to provide reasonable oversight during off-campus events, where inappropriate conduct by members of the cheerleading squad included hazing activities, alcohol use and public nudity.

In response, the University of Kentucky today dismissed all four cheerleading coaches — Head Coach Jomo Thompson and Assistant Coaches Ben Head, Spencer Clan and Kelsey LaCroix — from their duties with the program.

“A commitment we make and renew every day at the University of Kentucky is that the success of our students is at the center of everything that we do. But for that sentiment to be more than words, we must always act in ways that honor that commitment — especially when we discover rare instances where those who supervise and guide our students don’t meet the standards of integrity we expect of each other. This is one of those times,” said UK President Eli Capilouto. “The University of Kentucky has built the nation’s premier collegiate cheerleading program. But regrettably, the integrity of the program has been compromised by inappropriate behavior by some squad members on off-campus trips and by lax oversight by the program’s coaches and advisor.”

The three-month investigation involved the interviewing of more than 60 students, coaches and administrators in the cheerleading program and the final report found the following:

• Coaches knew or reasonably should have known of inappropriate conduct by cheerleaders and failed to take sufficient steps to address the conduct;

• During a team retreat at Lake Cumberland, some cheerleaders performed gymnastics routines that including hurling their teammates from a dock into the water while either topless or bottomless. The routines, known as “basket tosses,” were done at the direction of other members of the squad and within the view of at least some of the coaches;

• Coaches allowed cheerleading alumni to bring boats and alcohol to the retreat, where some cheerleaders were partially naked and/or drinking while riding on boats;

• Coaches did not confiscate alcohol brought to the retreat by some squad members or intervene to stop students from consuming alcohol. Several squad members became so intoxicated they required medical treatment; and

• During a cheerleading camp in Tennessee, some cheerleaders were directed by other members of the squad to perform lewd chants and wear outfits that did not include underwear.

On Tuesday, several current and former Kentucky cheerleaders voiced their displeasure on Twitter with the university’s firing of the school’s cheerleading coaches.

This program is the epitome of professionalism. It’s not only made me a better athlete, but also a much better person. This greatly affects myself and my teammates who have worked our whole lives to get to this university/team. Please don’t feed into lies that are hurting us. https://t.co/IJs44Ah4jj

This program has been nothing besides outstanding & produces outstanding people because of the guidance our coaches provided for us. I pray people don’t give in to lies that went too far. https://t.co/9CLlt4wgio

This is completely false. There was no hazing. https://t.co/8LXhF1N4dK

Hazing is bad. However hazing DID NOT TAKE PLACE. Everyone on the team had a CHOICE. If you did not want to do it, you didn’t have to and should not have done it. https://t.co/wn5uPSM5Cd

My cheerleading coaches afforded a scholarship that will allow me to receive two college degrees. They even provided opportunities to those on the team that struggled to afford out of state tuition to teach cheerleading to the young cheerleading in the local community.

This isn’t right! The coaches for the Kentucky Cheer program have always been professionals and have never pressured any athletes into misconduct! https://t.co/hlHBQXMjPE

WRONG. WRONG. WRONG. Actions are made by individuals and not influenced by the coaching staff AT ALL. Someone’s just mad they didn’t get what they wanted and trying to destroy a legacy. The coaches are the top in the industry and I’m proud to have be coached by them. https://t.co/jD9V0YLWWZ

Y’all are idiots....the people who started this “ investigation” knew exactly what they were doing and they did it because they didn’t get what they wanted. No coach at UK has ever FORCED anyone to do anything and always looked out for everyone’s safety. This is GROSS UK 🤬🤬🤬🤬 https://t.co/Od2Ak9hDaL

In regards to the UK Cheer allegations— Here I am doing a basket at the lake retreat.

1.) I am not being hazed
2.) I am not topless
3.) I am not under the influence pic.twitter.com/a6kdGVcuog

NOTE: No one was hazed in the making of this video!!

Also:
*I was not topless (as you can see)
*I was not under the influence
*I was not forced/coerced into doing this

And then there were these people…

Breaking news...really hot people may drink and run around nude while in college. Whats the big deal?