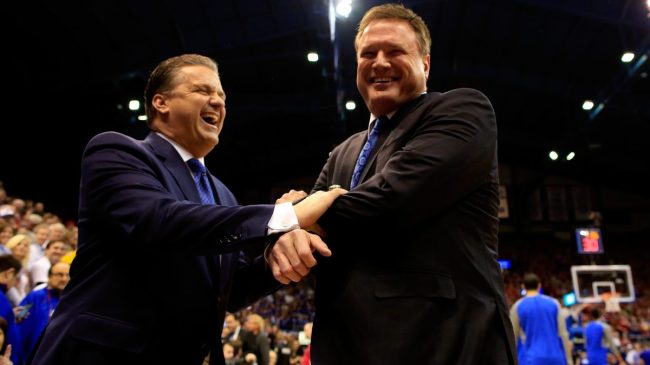 The Kentucky Wildcats suffered an unexpected defeat early in the NCAA Tournament.

Entering March Madness as a No. 2 seed, the Wildcats fell to Saint Peter’s which sparked a Cinderella run to the Elite Eight for the Peacocks. It sent Kentucky packing, though, ending an otherwise successful season.

The team won 26 regular season games, finished third in the SEC, and landed a top 10 national ranking ahead of the postseason. Star player Oscar Tshiebwe received college basketball’s Player of the Year award while a number of others scored All-SEC honors.

And Wildcat fans will be the first to let you know that they beat national championship participants Kansas and North Carolina by a combined 47 points in non-conference action.

But the early departure from the NCAA Tournament put a sour taste in many Kentucky supporters’ mouths.

After that upset to 15th-seeded Saint Peter’s, much of Big Blue Nation called for John Calipari’s job. The sentiment seems to be that Coach Cal has underachieved with Kentucky’s talent since taking over in Lexington.

Calipari came to Kentucky in the 2009-10 season. Since then, he’s helped the Wildcats win 365 games, reach four Final Fours, and take home a national title. He’s won 20 games or more in all but one season.

Still, the high expectations inside the program believe that Kentucky should be immune to opening round losses in March Madness. Fans believe that the Wildcats should be in the championship matchup year after year.

But this Bill Self comparison might change their minds.

John Calipari And Bill Self Have Had Similar Success

Bill Self just picked up a national title with a win over North Carolina. It’s his second while at Kansas, with his first coming back in 2008.

Self is widely considered to be one of college basketball’s top coaches, but even he has had to deal with this same type of criticism.

Still, prior to his latest title win, Self had landed just one title in 19 seasons. Like Calipari, he’s got four Final Four appearances at Kansas, and that’s with six more seasons under his belt at his blue blood program. His Jayhawks lost opening round matchups to the likes of Bradley and Bucknell (in back-to-back seasons).

It raises the question, why is Calipari being bashed while Self is being praised for his career at Kansas?

He will probably get that second title tonight but it’s taken time. Some fans act as if Cal winning another title is an absurd thought but in reality it seems more absurd to think he can’t. Just my thoughts tonight.

The difference seems to be Kansas’s patience with Self, while Kentucky wants to let Calipari go after one bad postseason run.

It’s worth noting that winning a college basketball championship is very hard. There are only eight active coaches with a title, and Calipari is one of them.

Despite the comparison, fans still chimed in on the future of their head coach on social media. Many still believe that their program is too good for Calipari. Take a look below.

Because he’s consistent. He wins at least a share of his conference every year, he generally beats ranked teams, he doesn’t miss the tournament, and draft day isn’t the best day his season.

Does Bill self spend most of his time talking to his fans in a condescending manner? Does he tell them they don’t know what they’re talking about? Hell, does he call timeouts at the end of games? Is his main focus keeping the NBA properly staffed?

Embiid and Wiggins are the only nba stars he’s had. He’s had a lot of good college players but not near as many nba studs as Cal. Wall Cousins Davis Bam Herro Shai Fox Murray KAT. Too much nba talent not to have more.

He isn't gonna get that 2nd one that's the problem. He is lucky to get the one. Lifetime contra t has made him content

Bc our fan base is full of overbearing, obnoxious idiots with unrealistic expectations

Kansas and Kentucky are the nation’s two winningest programs in college basketball history. Hopefully one takes after the other when it comes to coaching change.