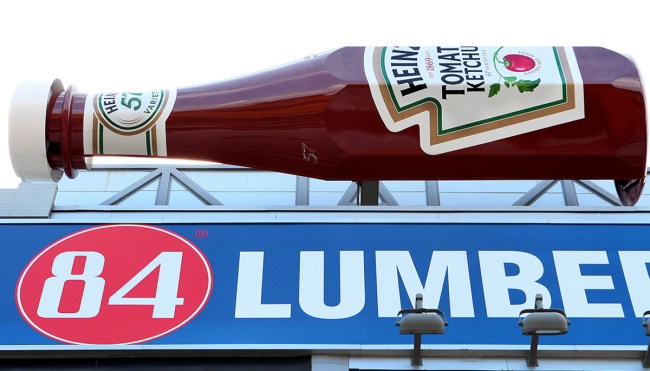 Earlier this month, the Pittsburgh Steelers reached the end of an era that spanned more than 20 years after the naming rights to what was once known as Heinz Field were sold to the Michigan-based insurance company that agreed to a deal worth a reported $150 million to redub the venue “Acrisure Stadium.”

The Steelers called Three Rivers Stadium home for three decades before it was demolished in 2000, and the following year, they played their inaugural season at Heinz Field (which was notably demolished by Bane in The Dark Knight Rises).

It didn’t take fans too long to warm up to the new location, and based on what many of them had to say about the name change after the news broke, it seems like Acrisure is fighting an uphill battle when it comes to ensuring the new moniker will be embraced by Steeler Nation (a sentiment that was echoed by Ben Roethlisberger).

One of the signature features at Heinz Field was the two massive ketchup bottles that sat atop the scoreboard and “poured” out a virtual serving whenever the Steelers reached the red zone.

As a result, plenty of people were disheartened to learn those longtime staples would disappear from the stadium ahead of the upcoming season, and on Monday, their worst fears were realized when a construction crew arrived on the scene to start dismantling the giant condiment containers.

One ketchup bottle down pic.twitter.com/pX1r9hDAZW

It didn’t take long for heartbroken Steelers fans to react to the video as it started to make the rounds (while a few others chimed in with some jokes).

This might be the worst day of my life https://t.co/Q1He5NOWzw

this is worse than any break up https://t.co/u9HZYuEXpY

No. Nope. Put it back https://t.co/LVWidJmDiQ

The Heinz Ketchup regime in Pittsburgh may not have been the height of ethics, but the power vacuum left behind from this CIA regime change will inevitably lead to the rise of radicals and terrorists desperate to fill the gap. https://t.co/KSoKd5fimd

How long will it take for @darrenrovell to get this in his backyard? https://t.co/iSm3rLSuUZ

The most drastic measure yet to try to get Heinz ketchup to pour from the bottle. https://t.co/jXisOOurm7

It’s unclear what will happen to the bottles now that they’ve been taken down, although it’s not crazy to imagine a Steelers fan with more money or space than they know what to do with would pay a pretty penny for one of the most iconic pieces of memorabilia imaginable.