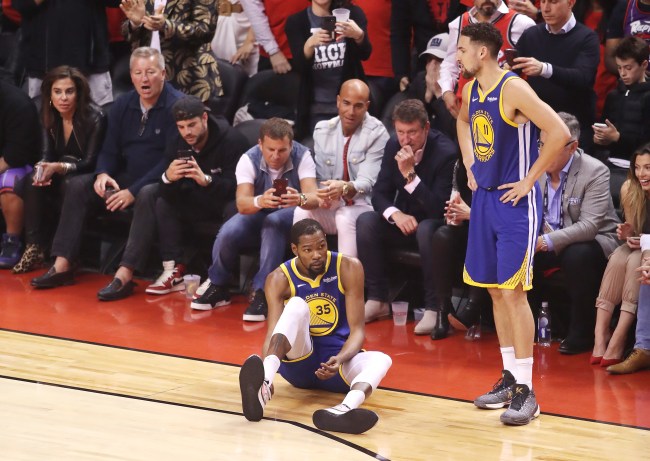 During game 5 of the NBA finals, Kevin Durant suffered a devastating Achilles injury After sitting out for over a month under careful guidance from Warriors team doctors after sustaining a calf strain during a playoff game vs the Houston Rockets

Warriors coach Steve Kerr would later confirm that Durant will be forced to sit out the entire 2019-2020 season with the injury.

Steve Kerr: "What matters is Kevin Durant is going to miss next season with an Achilles tear. What matters is Klay suffered a knee injury. We'll know more later. But it's just brutal, just brutal what these guys have had to deal with."

I think you’re going to likely see at least a step back,” said Jeff Stotts, a certified athletic trainer who analyzes injury trends at InStreetClothes.com. “At least, that’s what the studies show—that there is going to be a dip in productivity.”

“It’s hard to return to an elite level of play following that type of injury,” Stotts said, “especially in basketball, with the constant, sudden, start-stop jumping motion that the calf and the Achilles are critical and vital to.”

“He’s not going to be an 82-game-a-year guy,” said a doctor working for another NBA team. “I always say that they can be the same player in smaller doses. So, fewer minutes, fewer games. You will see flashes. The sustained greatness is really, really tough.”

Despite the fact that there’s a good chance Durant will never be the same player the Golden State Warriors still plan to offer him a max contract according to ESPN’s Brian Windhorst.

Windhorst's 'understanding' is that the Warriors still 'intend' to offer Klay Thompson and Kevin Durant five-year max deals, which would push payroll with luxury tax to about $350 million pic.twitter.com/JLmCqp5OTx

We’ll have to wait and see what options KD has during free agency and if he’ll take the Warriors up on their offer.