The Identity Of The Security Guard Who Shoved P.J. Tucker During His Confrontation With Kevin Durant Raises Some Serious Questions 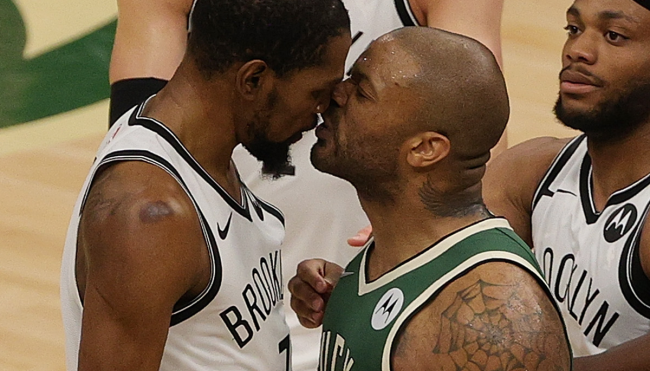 It’s not super uncommon to see NBA players get very heated with each other on the court, but in this day and age, it is pretty rare for those confrontations to end in the fisticuffs basketball fans were routinely treated to a few decades ago.

Nowadays, most altercations follow the same formula: a couple of guys act Big Mad and do a bunch of posturing while waiting for someone to swoop in and give them an excuse to say “You’re lucky someone’s here to hold me back.”

That’s basically what unfolded when Kevin Durant and P.J. Tucker got into it during Thursday night’s Eastern Conference Semifinal game between the Nets and the Bucks. The two men got in each other’s faces after Durant chirped Tucker following a foul in the third quarter, which led to what initially appeared to be a security guard storming onto the hardwood to break things up.

Kevin Durant and PJ Tucker got right into each other's faces. pic.twitter.com/wB4IvtAUxv

Draymond Green seemed to find that development pretty entertaining, and I can only imagine he’ll be very amused after learning the identity of the person in question.

This league has gotten so soft, security ran on the court 😂😂😂😂😂

According to The Athletic, the mystery man wasn’t an employee at Fiserv Forum but none other than Kevin Durant’s personal bodyguard, who apparently felt the need to come to the rescue of the superstar. It’s a particularly interesting development when you realize a couple of players had already stepped in to diffuse a situation that only escalated after the unidentified muscle shoved Tucker away.

When you consider the NBA has spent the past month dealing with a rash of unruly fans, it’s hard to imagine the Nets won’t be getting a phone call from the league to figure out why the hell the bodyguard the team pays to exclusively protect Durant gave them another headache to deal with.