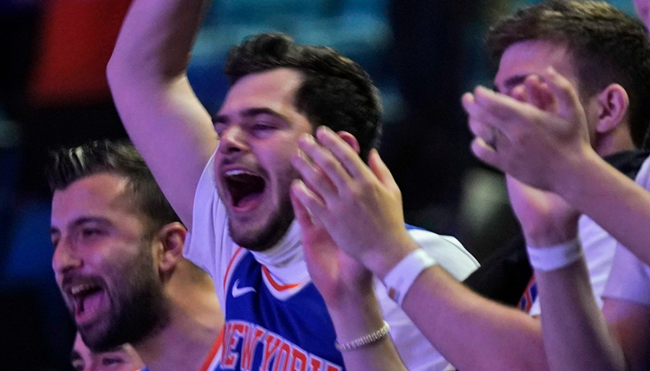 Earlier today, a colleague of mine who will remain unnamed (for reasons that will soon be obvious) issued an Absolutely Scorching Take when he not only typed the following words but presumably reread them before deciding to send this declaration to all of his co-workers on Slack: “Having fans back at sporting events has actually sucked.”

He scrambled to clarify that stance after getting blindsided by the tsunami of mockery he somehow didn’t see barrelling his way—one that was absolutely dwarfed by the Mt. Everest-sized hill he was seemingly willing to die on. Thankfully, he salvaged some of his dignity by admitting there’s something to be said for the electric atmosphere we’ve been deprived of over the course of a largely spectatorless year, saying his comment primarily stemmed from a spate of recent incidents involving fans who’ve crossed the line.

On Sunday,  Brooks Koepka had his injured knee reaggravated at the PGA Championship after being swallowed up by the massive horde of gallery members who swarmed the 18th hole. He seemed to initially think someone was trying to give him the Nancy Kerrigan Treatment, but it’s hard to believe anyone was being purposefully malicious.

The same cannot be said for the two NBA fans behind a couple of ugly moments that transpired on Wednesday. Russell Westbrook had to be held back from attacking someone in the stands who threw popcorn at him in Philadelphia, while Trae Young played it remarkably cool after discovering someone spit on him at Madison Square Garden.

On Thursday, the 76ers and the Knicks announced both people had been permanently banned from entering the arenas where these ugly scenes unfolded.

Statement from the Philadelphia 76ers: Fan who dumped popcorn on Wizards‘ Russell Westbrook has had his season ticket revoked and been banned from Wells Fargo Center indefinitely. pic.twitter.com/jVBWWVcZjT

Both teams went the same route I did earlier by declining to reveal the identities of the people found responsible. However, not everyone was thrilled with that decision—including LeBron James.

By the way WE AS THE PLAYERS wanna see who threw that popcorn on Russ while he was leaving the game tonight with a injury!! There’s cameras all over arenas so there’s no excuse! Cause if the 👟 was on the other 🦶🏾.🎥 #ProtectOurPlayers

Stephen A. Smith appeared to be in his corner based on the solution he proposed on First Take, saying people who go out of their way to provoke players like this deserve to be put on blast as opposed to privately exiled from attending games in the future.

The @NBA needs to send a strong message in putting a stop to this BullS&@$!!! pic.twitter.com/Jy4HYq38zB

The NBA eventually chimed in to announce its plans to get more serious about enforcing its Code of Conduct going forward after spending a solid year not really having to worry about it at all.

The NBA Fan Code of Conduct can be found here: https://t.co/IhUgBUmjFp

Based on the variety of responses to pop up in the wake of these incidents, there’s one major question that’s begging to be answered: Who’s right? There may not be a perfect solution to the issue, but I think we’ve already touched on the most crucial pieces of the puzzle.

First, let’s take a closer look at the public shaming option. It’s an appealing strategy people around the world have been harnessing for thousands of years, and it would make sense to do the same now when you consider it’s Having A Moment courtesy of #CancelCulture.

Unfortunately, the internet doesn’t exactly have a stellar track record when it comes to campaigns like this, as it’s much easier to attempt to ruin the life of someone who’s been accused of something than it is to take a few minutes to actually verify those claims are true. However, you’re also going to encounter a few issues even if the guilty party is identified correctly.

If you watched this year’s Super Bowl, you might remember seeing a streaker sprint across the field. If that is in fact the case, you should know your brain is lying to you, as the video of him barreling toward the end zone eventually popped up online but didn’t actually air on the live national broadcast.

Why? Well, most networks immediately cut away from those stunts to deprive the people behind them of the attention they tend to crave, which is a trait they share with a lot of the people driven to provoke or assault players in some wildly misguided quest to prove they can hold their own against a pro athlete or simply rack up some clout. As much as I’d like to think being banned from games is enough of a deterrent for most people, knowing there’s a policy requiring your name to be blasted to the masses for harassing players could also attract some unsavory actors who view that punishment as a slap on the wrist.

Interestingly enough, there’s a pretty simple fix to up the ante a bit tucked away at the end of the NBA’s aforementioned Code of Conduct, which reads all fans are subject to “possible arrest and prosecution” for being in “violation of local ordinances.”

Based on the statement the Knicks put out, it appears the dude who made the brilliant decision to hock a loogie at Trae Young might be getting a visit from the NYPD at some point in the near future. Now, if the people who get paid to conduct criminal investigations for a living decide he should be hit with charges, the existence of public records means the debate over whether or not their identity should be revealed means the problem essentially solves itself.

I know it may not necessarily mean they’re guilty, but I’m sure leagues would be more than happy to let law enforcement make the final call when it comes to releasing names as opposed to doing the same itself or giving amateur online sleuths an excuse to try to crack the case if they’re withheld.

Is that really the ideal solution? Well, no. That honor goes to allowing players to settle their issues with instigators in a trial by combat if they so desire. However, I think the one I just presented is a solid backup until we reach a point where that’s feasible.