Kevin Durant On People Claiming He Fouled LeBron Down The Stretch: ‘Keep That On Twitter’ 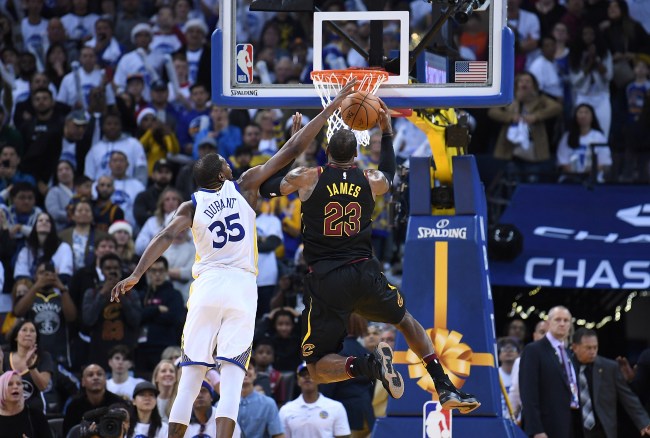 With less than 30 seconds left in the Cavs/Warriors Christmas Day game and the Warriors ahead 95-92, LeBron got a step on Kevin Durant to the bucket. As he began the layup process, KD reached across his body and fouled him. It wasn’t an egregious foul, and LeBron absorbed it like a baby back bitch. It wasn’t called, and it buried the Cavs. The Warriors went on to win 99-92. Instead of focusing on the Cavs season-worst .318 from the field and 14 turnovers, the media will harp on the controversy. Me included. Because I’m an inflammatory piece of shit. GUILTY!

After the game, LeBron said: “He fouled me twice. But, whatever. What are you going to do about it?”

When KD, who scored 25, was asked about the no-call, he immediately got defensive.

Kevin Durant on the Twitter debate that his final defensive stand was a foul: "Keep that shit on Twitter" pic.twitter.com/CpJ0lyCnm5

“It felt clean. It’s probably the same play a bunch of those dudes on Twitter probably arguing about at 24 Hour Fitness that that wasn’t a foul. They’ve been in that position before, but just not on Christmas at the Oracle Arena. So they know. They know if they ain’t call it it’s not a foul. I’m sure if they get that call next week at 24 Hour Fitness, they’re going to be pissed that they called a foul. So keep that shit on Twitter.”

KD knows a little something about sparring on Twitter.

Granted, the media inflammation of the no-call is only used as an instigating mechanism in hopes KD and LBJ will call each other pussies and we can talk about it until the summer, but it’s PROVOCATIVE. IT’S WHAT THE PEOPLE WANT.

Hey KD, rumor has it, LBJ banged your mother. Kind of fucked up if you ask me.