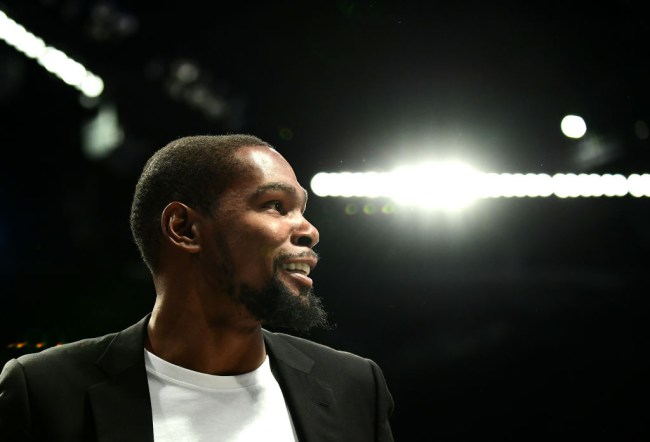 It’s become somewhat of a norm to see some of the world’s top soccer players come to the United States towards the end of their careers and play in the MLS, but we don’t often see the scenario flipped, especially not when it comes to basketball and the NBA.

For Kevin Durant, however, playing over in Europe is a dream of his.

Durant joined Serge Ibaka’s ‘How Hungry Are You?’ show on YouTube and talked about how he wants to play over in Europe, specifically for Barcelona, for his final season before retiring.

“I really want to play overseas my last year. At Barcelona. I would [like to], one of these days.

That’s the second-best league in the world and EuroLeague games look fun. But that’s just me in the house, on the couch, watching TV, dreaming. I don’t know for a fact if I’ll do it, but it would be cool to experience it.”

I’d like to think that if I was in Durant’s shoes, I’d have a similar thought process about playing a year over in Europe to close out my basketball career.

Durant is already set for life when it comes to money, but at that point of his life he’ll likely have more money than he’ll know what to do with and going to experience basketball in Spain – where he’d probably still be the best player in the league – would be pretty damn cool in my mind.

Of course, he could travel to anywhere in the world during the offseason, hell he could live in Spain for the Summer if he wanted to, but playing in the league over there and being the superstar for a full season on a different continent sounds like a pretty interesting and unique dream.

Durant turned 31-years-old in September and has a handful of quality years in the NBA left barring no other major injuries, but we could see him head to Spain in the somewhat near future to hoop for Barcelona.