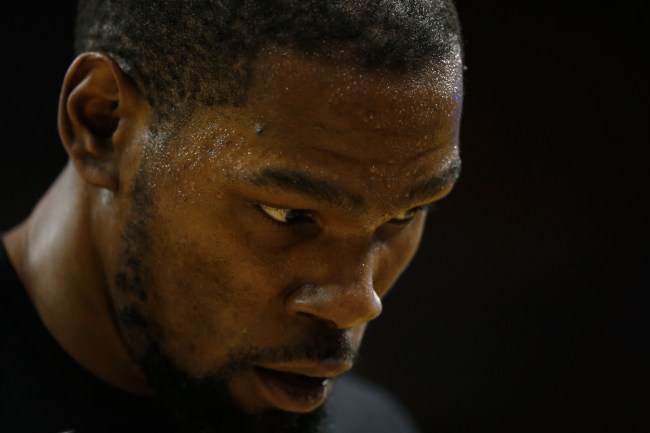 Kevin Durant is about the become the biggest name on the free-agency list in the NBA when, this summer, he hits the open market. The two-time champ — who’s currently out with a calf injury — has long-been rumored to be joining the New York Knicks, with some people, Stephen A. Smith among them, even going as far as saying that it’s a “95 percent” certainty that Durant and fellow All-Star Kyrie Irving are headed to the Big Apple.

But pump the brakes on that rumor, because, according to longtime NBA insider Marc Stein of the New York Times, his sources say that Kevin Durant’s services this summer might come down to just two teams: The Knicks and now the Los Angeles Clippers. This is what Stein had to write following some chats with his trusted, “plugged in” people regarding Durant’s upcoming free-agency.

“Within the last month, very smart and plugged-in people I have consulted say that the Los Angeles Clippers have emerged as an equally dangerous threat to the Knicks to sign Durant away from Golden State. And I believe it.”

Now, this might not be that hot of a take — because there have been rumors floating around out there that the Clippers, not the Lakers, are actually believed to be the more desirable L.A. franchise for free agents this summer — but the fact that another person, Stein, has echoed what some have suggested about Kevin Durant joining the Clips is interesting. Remember, earlier reports suggested that the Clippers could have “better than a 50 percent chance” of landing both Durant and Leonard, which would really change the NBA landscape.

While the new info from Stein is juicy, there’s a bit of a caveat with it, because the writer also goes on to add that, at different times throughout the season, similar trusted sources have mentioned Kevin Durant’s name linked to other teams with “conviction,” so maybe we should take this latest news with a bit of a grain of salt.

“Problem is, at various points during the season, I have heard trusted insiders state with conviction that Durant is already planning to join the Knicks … and then that he is likely to consider the Nets as well … and now that he is eyeing the Clippers just as intently as New York.”

Look, Kevin Durant’s future plans involve getting healthy enough to play in the NBA Finals, but, outside of that, there probably won’t be much to report till this summer — even with all the wild stories floating around about his decision already being made up. Sure, everyone thinks they have some sort of insider info on his upcoming free-agency, but until Durant has time to decompress from the season and actually sits down to think about his options, there’s a good chance that he doesn’t even know where he’ll be playing next year. Still, we all can’t help but listen to the juicy rumors, right?