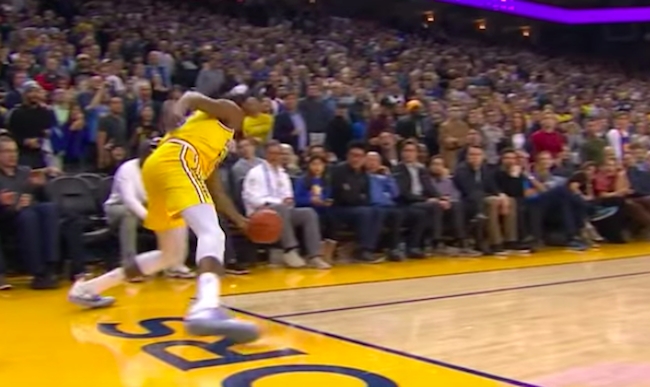 Last night’s matchup between the Golden State Warriors and the Houston Rockets was easily the most anticipated game of the evening and it’s safe to say it more than surpassed expectations.

The Warriors had a 20-point lead at one point in the game but James Harden put the team on his back to even the score at the end of regulation before doing James Harden things to seal the game in overtime.

Harden might have been the one to nail the shot but it was really made possible by the referees, who somehow managed to miss one of the most obvious calls of all time.

With 30 seconds left in a tie game, Kevin Durant stepped out of bounds to recover a pass that would lead to Steph Curry nailing a jumper to put the Warriors up by two.

TNT might have aired the replay in slow motion but you don’t really have to analyze the tape that hard to realize just how egregious the lack of a whistle was.

The internet quickly took note— including Chris Paul and Rockets GM Daryl Morey, who chimed in with some Bird Box references that seem to be hot in the streets with the Cool Kids online right now.

So we doin the #BirdBoxChallenge during NBA games now huh 🤔

Durant was crip wlaking before he saved it pic.twitter.com/4QjlErgnZu

Calling Kevin Durant in bounds here could go down as the worst call in the history of life pic.twitter.com/lToDGHHPrY

After the game, Durant admitted he knew he’d stepped out of bounds on the play while throwing some shade at the refs in the process.

Kevin Durant knew he was way out of bounds on that late save, wasn’t surprised the call was missed: “The refs were missing a lot tonight.” pic.twitter.com/Ey0uJ7d42O

I guess Durant is in the mood for another fine.