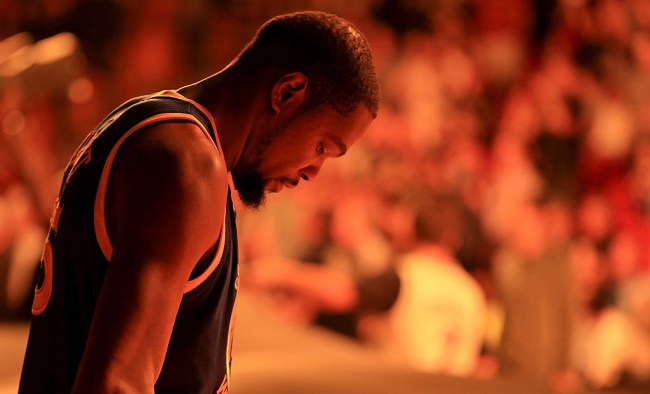 You know who the real loser of The Last Dance is?

No, it isn’t Karl Malone or Scott Burrell, nor is it Jerry Reinsdorf or Jerry Krause. It’s not tobacco use and it’s not gambling addictions. Hell, it’s not even Park City pizza restaurants or Pacers Karen. No, in the hours following the conclusion of The Last Dance, the real loser of the 10-part docuseries seems to be… Kevin Durant?

Poor KD, man — dude can’t even take a piss without being criticized for the strength of his stream these days. The guy hasn’t even suited up for an official NBA game in close to 12 months, yet — for better or for worse — he remains at the forefront of analysts’ minds (which I actually find to be unfair, but I digress).

Take Jalen Rose, for example, who took a massive shot at KD during Monday morning’s edition of Get Up when he pointed out that Michael Jordan — the now-and-always undisputed GOAT — worked diligently at his craft to overcome the likes of the Celtics, Lakers, and Pistons instead of merely joining them. Hmmmm… I wonder which modern NBA player who made an infamous jump to a historic front-running team Jalen could possibly be referring to?

Then, less than an hour later, Durant’s name was once again invoked by the First Take crew as they discussed The Last Dance‘s finale (you’re just going to have to take my word for it, I wasn’t able to screen record the clip in time).

It’s yet another painful reminder for Durant that — despite the fact he was the best player on those Warriors teams — he’ll simply never live down his surrendering move to Golden State, especially within basketball circles. The competitive drive of most professional athletes doesn’t seem to allow them to reconcile blowing a 3-1 lead and then leaving for the team that beat you.

Generations of competitors consider Michael Jordan to be the greatest athlete — not just basketball player, but athlete — of all-time, so when Jordan’s inhuman sense of will and determination is contrasted against Durant’s fateful move from Oklahoma City to San Fransisco, the decision becomes all the more indefensible.

If Durant somehow carries the Brooklyn Nets to an NBA title, I believe he’ll have done enough to change the general narrative of his career, but until then, the future Hall of Fame forward seems destined to be remembered as the dude who took the easy way out.