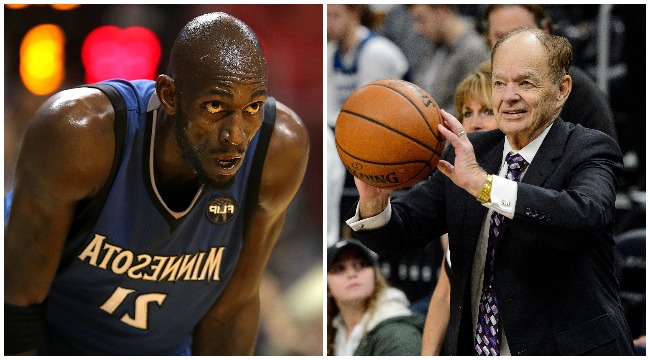 Can you imagine being an NBA owner at the helm of a perpetually irrelevant franchise and having the gall to treat the most legendary player to ever don your team’s uniform like a co-ed league bench player?

After the Celtics announced their plans to retire Kevin Garnett’s No. 5 jersey next season, the Timberwolves top brass remain quiet despite KG spending double the time in Minnesota that he did in Boston.

The bad blood stems in part from Taylor reportedly backing out of a deal Garnett had with former Wolves coach Flip Saunders upon re-signing with his old team in 2015. Garnett discussed eventually joining the team’s ownership group post-retirement, but Flip died in October 2015 of Hodgkin lymphoma, and Taylor never honored the deal.

In a recent interview with The Athletic’s Shams Charania, Garnett revealed what his perspective is on a Minnesota jersey retirement.

“Glen knows where I’m at, I’m not entertaining it. First of all, it’s not genuine. Two, he’s getting pressure from a lot of fans and, I guess, the community there. Glen and I had an understanding before Flip died, and when Flip died, that understanding went with Flip. For that, I won’t forgive Glen. I won’t forgive him for that. I thought he was a straight up person, straight up business man, and when Flip died, everything went with him. There’s no reason to complain. Just continue to move on. My years in Minnesota and in that community, I cherish. At this point, I don’t want any dealings with Glen Taylor or Taylor Corp. or anything that has to do with him. I love my Timberwolves, I’ll always love my guys, I’ll always love the people who fuck with me there. I’ll always have a special place for the city of Minneapolis and the state of Minnesota in my heart. But I don’t do business with snakes. I don’t do business with snake mu’fuckas. I try not to do business with openly snakes or people who are snake-like.”

TL;DR: Kevin Garnett wants to pull Glen Taylor’s undies above his head before running them up a flag pole.